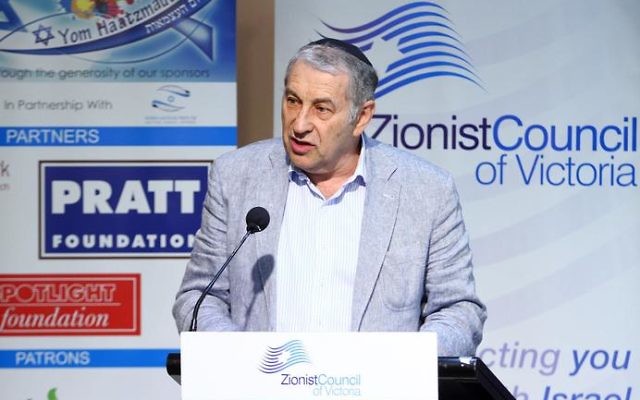 AFTER 16 years of Jewish and Zionist leadership, Danny Lamm is on the home stretch of his second and final term as Zionist Federation of Australia (ZFA) president; four years as eventful as any in the four decades he has been active.

From Mizrachi and Yavneh College in 1978, to end-to-end presidencies of the State Zionist Council of Victoria (now Zionism Victoria), the Executive Council of Australian Jewry and, since 2014, of the ZFA, Lamm has never rested.

His Jewish community service is “a daily activity”, he told The AJN this week. Surrounded by walls and scrapbooks of Jewish community highlights, in an office where even the cup coasters have Zionist themes, Lamm, a son of Holocaust survivors, is a consummate Australian voice for Israel.

Successor Jeremy Leibler will bring “generational change”. But before his own term expires, there is much to do, he said, and this month’s ZFA Educators Conference, now in its 20th year, will gather some 400 Australian educators.

There were the milestones – Lamm warmly recalled Prime Minister Benjamin Netanyahu’s historic visit to Australia last year, and introducing him and Prime Minister Malcolm Turnbull to their audience at Sydney’s Central Synagogue.

When the US moved its embassy to Jerusalem, Lamm urged Turnbull to follow suit. While that has not happened, he said, “Sometimes small steps lead to bigger steps,” and he is elated at Australia’s decision to cease funding the Palestinian Authority, after reports some of the money may have incentivised terrorism.

During the 2014 Gaza war and the 2015-16 knife intifada, the ZFA mobilised Australian Jews, stating Israel’s case to politicians and media, he said.

Recalling close relations with prime ministers from John Howard onwards, Lamm is also confident ALP leader Bill Shorten will shore up his party’s support for Israel, lamented the “very negative” Greens, and defended his speech this year to the far-right Catch the Fire Ministries, a group expressing support for Israel.

The ZFA is a broad organisation, “of all [Jewish religious] streams” and of diverse ideologies, he stated.
Having met nearly all Israeli prime ministers from Menachem Begin onwards, Lamm said, “Australia is seen as a model Diaspora community in Israel and it’s appreciated – by the government, at the Jewish Agency, the World Zionist Organisation, JNF and others.”