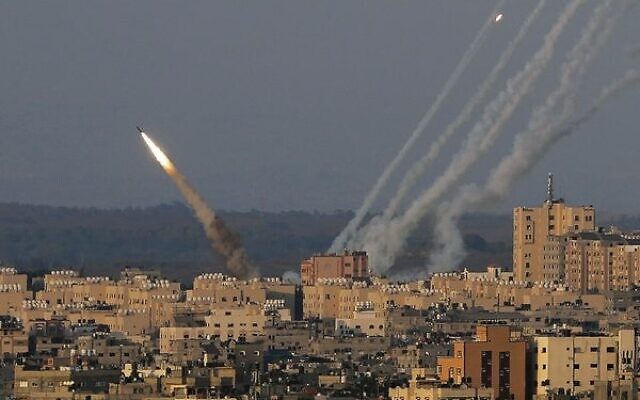 In his first public statement since a ceasefire brought Israel’s three-day military operation against the Palestinian Islamic Jihad terror group in the Gaza Strip to an end, Israeli Prime Minister Yair Lapid appealed to the people of Gaza that “there is another way”.

“We know how to protect ourselves from anyone who threatens us, but we also know how to provide work, livelihood and a life of dignity to anyone who wants to live in peace by our side,” Lapid said in televised remarks made from the Israel Defence Forces’ Tel Aviv headquarters.

“There is another way to live. The path of the Abraham Accords, of the Negev Summit, of innovation and economy, of regional development and joint projects. The choice is yours. Your future depends on you,” the Prime Minister said, in a rare appeal directly to Gazan residents, rather than to their leaders, the Hamas terror group.

PIJ launched more than 1000 rockets at Israel between Friday and Sunday night, when an Egypt-brokered ceasefire was agreed. Hamas, which controls the Strip, sat out the most recent bout of fighting.

“A special effort was made to prevent harm to non-involved civilians. The State of Israel will not apologise for protecting its residents with the use of force, but the deaths of innocent people, especially children, are heartbreaking,” Lapid said.

In a Tuesday briefing wrapping up the 66-hour Operation Breaking Dawn, the Israel Defence Forces said it “significantly damaged Palestinian Islamic Jihad and its leadership”.

The Gaza Health Ministry, run by Hamas, said that at least 45 Palestinians had been killed, including 15 children. Israel says as many as 12 of the children were killed by misfired PIJ rockets.

Several Israelis were lightly injured by shrapnel during the fighting, or while running for shelter when the rocket sirens sounded.

Speaking after Lapid in a joint press conference, Defence Minister Benny Gantz articulated the three clear objectives Israel achieved in the operation: removing the “immediate threat” to residents of the Gaza border region, “maintaining operational freedom of action”, and preserving deterrence against enemies who threaten Israel’s citizens and sovereignty.

Lapid also spoke with Egyptian leader Abdel Fattah el-Sisi on Monday, thanking him for his country’s role in negotiating the ceasefire.

But at around the same time at an emergency session of the UN Security Council, Egypt’s representative tore into Israel, lamenting the “43 martyrs” killed and making no distinction between PIJ fighters and innocent civilians. Osama Abdel Khalek made no mention of PIJ during his speech, during which he also chided Israel for allowing “settlers under the protection of the Israeli police to incur the courtyards of the Haram al-Sharif [Temple Mount]”.

He also blasted Israel for mass arrests of Palestinians, expansion of settlements, home demolitions and use of live-fire against Palestinian protesters.

US ambassador to the UN Linda Thomas Greenfield backed Israel’s right to respond to PIJ threats and rocket fire.

She expressed sadness over the civilian lives lost in the conflict and called for each of them to be investigated. But she clarified that parties “should refrain from jumping to conclusions until we can determine the facts. As just one example, Israel was originally blamed for an attack that inflicted civilian casualties in [the] Jabaliya refugee camp. It now appears to have been caused by a Palestinian Islamic Jihad rocket. So let us be sure to follow the facts and see where they lead us”.