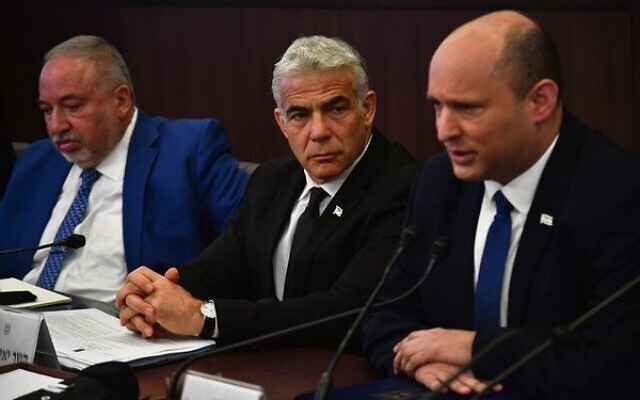 Israelis will head to the ballot box on either October 25 or November 1 as the final readings of a bill to dissolve parliament were to be held as of Wednesday.

Once the bill passes, outgoing Prime Minister Naftali Bennett will hand over to Foreign Minister Yair Lapid, who will serve as interim Prime Minister through elections and until a new government is formed.

The first reading of the bill to dissolve Israel’s 24th Knesset passed on Tuesday. The coalition’s initial plan was to push the dispersal legislation through all three of its plenum readings on Monday. But that process could not get started early enough because the bill first needed approval at the House Committee, headed by chairman Nir Orbach, who held off on convening his panel until late Monday in order to give the opposition more time for a long-shot bid to muster an alternative coalition.

Part of Monday’s holdup also came because the coalition and opposition could not agree on a final date for elections or on which outstanding legislation would pass before the Knesset’s dispersal. The two sides eventually announced they had reached an understanding that elections will be held on either October 25 or November 1.

It was further agreed that a bill that would bar a person under indictment, such as opposition leader Benjamin Netanyahu, from forming a government will not go forward. Netanyahu – the outgoing coalition’s chief political rival – is currently on trial for three separate corruption cases.

A Knesset legal adviser told the Constitutional, Law and Justice Committee that it would be “problematic” to legislate the controversial bill, given the proximity to elections.

During Monday’s delay, some opposition lawmakers, including Religious Zionism party leader Bezalel Smotrich, were pledging to try to somehow put together a Netanyahu-led alternative government without going first to elections, while coalition leaders were pledging to fight them.

Such a new coalition would need the support of at least 61 of the 120 MKs, and while Netanyahu successfully whittled away at the Bennett coalition’s majority, he has been unable to muster an absolute majority of his own in the current Knesset.

The Knesset must disperse before Thursday evening in order for a current law that extends Israeli law to settlers – which is due to expire – to be automatically extended for six months.

The coalition’s failure to renew the legislation was one of the precipitating factors for its demise.

Meanwhile at his last cabinet meeting as chair on Sunday, Bennett praised the diverse coalition for its achievements, which, he declared, were the fruit of its ability to work united on behalf of the people.

He listed a series of accomplishments belonging to his year-old government and thanked his coalition partners, which include dovish parties that support Palestinian statehood, nationalist ones that don’t, and for the first time in Israeli history, an Arab political faction.

“It was an excellent government that relied, yes, on a complicated coalition. And here in this room, there is a group of people that knew how to set aside ideological disagreements, to rise above, and to work for the State of Israel,” he said.

Bennett summed up the government’s time in power as providing security in the south and economic recovery from the ravages of the COVID-19 pandemic.

“For the first time in years, the harvest in the communities adjacent to the Gaza Strip has ended quietly and successfully, without incendiary balloons, fires or Hamas rockets,” Bennett said.

He also said hundreds of thousands of people had returned to work after, at its height, the pandemic left over a million Israelis unemployed.

“Together, we brought Israel from economic collapse to growth; together we reduced the astronomical deficit to zero,” he said.

Bennett is reportedly considering running in the upcoming elections in a party that will advocate broad political unity, despite reports asserting he would likely take a break from political life after his stint as PM.

“Now is the time for unity. What needs to be done right now is to take care of the country, the economy, security, and to provide many more years of quiet in Gaza. Iran needs to be dealt with and weakened, so it can’t harm us via its proxies,” he said on Monday.