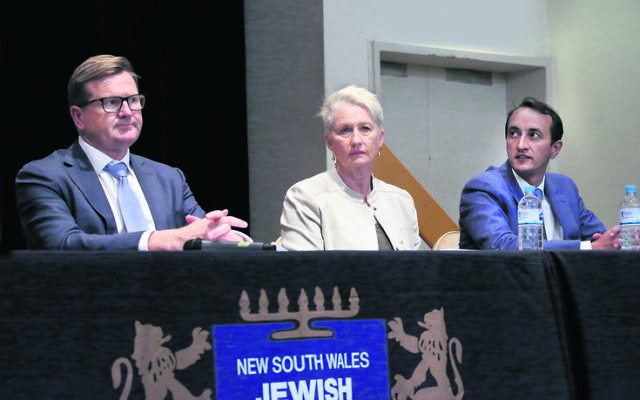 WHILE a plethora of issues were discussed, it was arguably the federal government’s embassy announcement which generated the most commotion at the NSW Jewish Board of Deputies Wentworth candidates’ forum on Tuesday night.

The evening presented a chance for four candidates – the Liberal Party’s Dave Sharma, Labor’s Tim Murray and independents Kerryn Phelps and Licia Heath – to argue their cases in a discussion moderation by the Executive Council of Australian Jewry co-CEO Peter Wertheim.

Phelps was stingingly critical of the timing of the embassy announcement, saying “there’s no question this was a politically motivated decision”.

She lamented the announcement being made “without bipartisan discussions” and “without a comprehensive analysis of the defence, the trade and the security implications”.

Murray added it was not “correct process” to raise the issue “in the middle of a very divisive by-election”.

Sharma countered that the Prime Minister has merely “announced a review” which would consider many factors, including a two-state solution, Australia’s economic security and strategic interests in the region.

“It would undoubtedly take into account the views across the Australian political spectrum, including the Labor Party and independents,” he said.

None of the candidates endorsed a unilateral recognition of a Palestinian state and all agreed that Israel comes under undue scrutiny and is subject to unfair bias at the United Nations.

“The UN must find a balance between addressing human rights abuses around the world and not treat Israel in the way that it has done over decades,” Phelps said.

Phelps reiterated her concerns reported in last week’s AJN about the review into religious freedoms, while Sharma urged the audience to wait until the report is released before coming to any conclusions.

Heath expressed concern that what she called “community-based moderates” had disengaged from the political process, resulting in people with “very intent interests” filling the political void.

Phelps, Murray and Heath all called for the 95 children on Nauru to be brought immediately to Australia.

“I want Australia to be a generous country to refugees … when we have control of our borders we can be generous,” Sharma said, adding he didn’t want the asylum seekers on Nauru “to spend a day longer there than is absolutely necessary”.

The recent IPCC report into climate change was also a hot topic of discussion, with Murray spruiking Labor’s approach as the “best policy”, Phelps outlining her “six-point plan”, while Sharma said he “accepted the science” despite coming under fire for the Coalition’s policy on the issue.