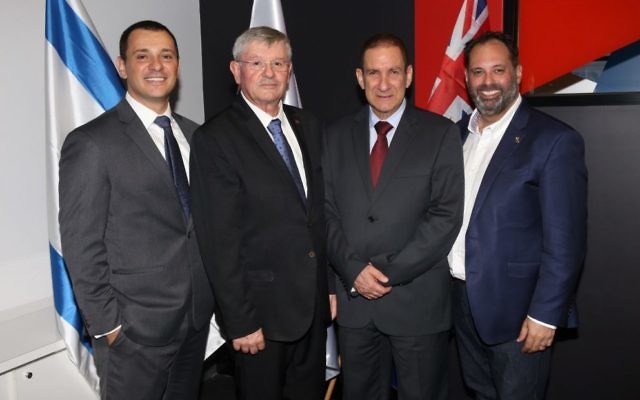 The CyberGym Training Arena in Docklands, which will be used to train Australian cyber-analysts, will also be part of “CyberGrid”, a global network of sites in Europe, the Middle East, the Americas, Asia and now Australia, strengthening the ability of government agencies and businesses to protect against cyber-attacks.

These sites are run by Israeli tech company CyberGym, which operates internationally, helping governments and enterprises defend against cyber-attacks.

CyberGym is a joint venture between Israel Electric Corporation (IEC), a $US7.7 billion ($A10.1 billion) company which faces countless cyber-attacks on a daily basis, and Cyber Control, a cyber-security consultancy established by Israeli security experts. Israeli cyber-specialists visiting for the launch included Yiftah Ron-Tal, a retired major-general with the Israel Defence Forces, who chairs IEC; Yosi Shneck, IEC’s senior vice-president; and Ofir Hason, CEO and co-founder of CyberGym.

The visitors explained that CyberGym conducts cyber-warfare preparedness training for government and private enterprises. It focuses on the weakest link in any emergency response system – the people who run it.
Aimed at critical infrastructure organisations, the newly launched Training Arena enables these groups to test systems, processes and people against cyber-attacks.

It prepares employees for responding to and fending off real-time cyber-attacks on complex, widespread systems and sensitive infrastructures. It also allows organisations to adjust their cyber-threat model to their environments.

Officially opening the new facility, Dalidakis said: “It’s exciting to have global leaders like CyberGym in Melbourne to be part of our thriving cyber-security and digital technology sector. Victoria is a hub for cyber-security and we’re working hard to attract more investment so we can protect Victorian companies from cyber-crime and win a larger share of the booming global cyber-security sector.”

Hason described his company as “a global leader in proactive cyber-security defence and training for critical infrastructure companies. The establishment of this Melbourne cyber-training and technologies arena, as the latest addition to the global CyberGrid network, further reinforces Melbourne’s position as the tech capital of Australia and a leader in the Asia-Pacific Region”.