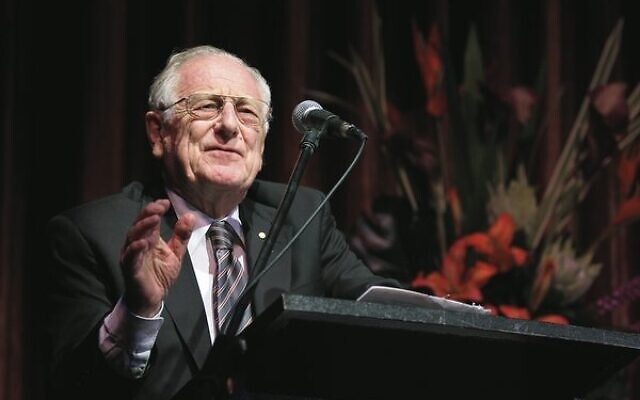 TRIBUTES have flowed for communal icon Phil Symons who passed away last month.

In a long and diverse communal career, Symons, 93, served as a president of the Victorian Jewish Board of Deputies – predecessor of the Jewish Community Council of Victoria (JCCV), – Mount Scopus Memorial College and Mizrachi, and was strongly involved with B’nai B’rith.

In 2010, he received the JCCV’s General Sir John Monash Award for outstanding service, telling The AJN, “I feel involvement in Jewish organisations is essential for the future of the Jewish community.”

He was honoured with the Zionist Federation of Australia and the World Zionist Organisation’s Jerusalem Prize in 1987, and became a Member of the Order of Australia (OAM) in 1995.

“The Melbourne Jewish community on the world stage is quite remarkable and it’s because of the involvement of its people. We have a lot for which we have to be proud,” he had told The AJN.

Mount Scopus principal Rabbi James Kennard this week recalled Symons describing his long-serving presidency of the college as “his most rewarding”.

Noting the years 1973-1986 were critical for Mount Scopus’s development, Rabbi Kennard said, “Bookended by a new principal at the start and finish of Phil’s tenure, these years saw the school’s focus pivot from an emphasis on academic results and driving students towards law or medicine, towards greater attention to Jewish life and learning.

“The first ulpan – immersive Israel experience – was a classic example. Phil was the driver behind the purchase of what became Gandel Besen House, which quickly became an essential home for much of the primary school.

“Phil was respected and admired by all as a leader, a doer, an achiever; never lofty or proud, but only ever with dignity, compassion and a genuine care for the community, the students, and their Jewish growth.”

Former Mizrachi president Danny Lamm described Symons as “forthright and committed – [he] balanced family life well with his contribution as a community leader. We worked together for many years at Mizrachi. He will be sorely missed.”

JCCV executive director Judy Fetter said Symons was “passionate about the Victorian Jewish community. His impact on advancing Jewish education, protecting Jewish traditions and values for current and future generations and volunteering his time and expertise to assist others is legendary.”

Laid to rest at Melbourne Chevra Kadisha in Lyndhurst, the great-grandfather is survived by his wife Ruth, sister Yetta Naphtali, and four children.