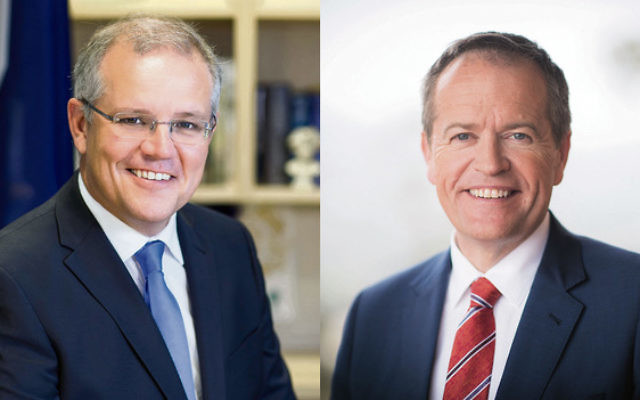 Prime Minister Scott Morrison and Opposition Leader Bill Shorten have made their final pitches to readers of The Australian Jewish News ahead of Saturday's federal election.

WE live in the best country in the world.

We are a free nation – of different faiths, backgrounds and creeds.

Jewish Australians understand what the promise of Australia means.

We are keeping faith with that promise by building a strong economy that will allow us to keep taxes low; build the infrastructure you need; guarantee the funding of the essential services that you rely on, and create the jobs that are vital.

The budget handed down by Treasurer Josh Frydenberg is delivering the first budget surplus in more than a decade. Under our government, 1.3 million new jobs have been created. By keeping the economy strong, we will create another 1.25 million jobs over the next five years, including 250,000 new jobs for young Australians.

A Liberal–Nationals government will keep delivering tax relief for families and businesses because we want hard-working Australians to keep more of what they earn.

We also want to make it that bit easier for first home buyers to get into the market with our new scheme to slash the size of a deposit to five per cent and save around $10,000 in Lenders Mortgage Insurance.

We will keep Australians safe as we always do, and we will keep our borders secure.

Our prudent economic management means we can guarantee more funding for the essential services that Australians rely on: schools, hospitals, medicines and roads – all without raising taxes.

We are supporting families and businesses with a $100 billion infrastructure plan to bust congestion and strengthen productivity.

This year Australia celebrates 70 years of diplomatic relations with Israel.

Our two countries share a commitment to democracy and the rule of law. We are committed to a free press, science and research, prosperity for our people and innovation.

Our government has recognised West Jerusalem – the seat of the Knesset and many institutions of government – as the capital of the State of Israel. We acknowledge the aspirations of the Palestinian people for a future state with its capital in East Jerusalem.

And we look forward to moving our embassy to West Jerusalem when practical, in support of, and after the final status determination of, a two-state solution.

I acknowledge that Jerusalem’s ultimate status, including its borders and boundaries, is a final-status issue to be resolved through direct negotiations between Israel and the Palestinians.

Labor would reverse our decision on West Jerusalem and weaken our recognition of the State of Israel.

Our government has also established a Trade and Defence Office in West Jerusalem to enhance and support our deepening collaboration on trade, defence industries, investment and innovation.

Australia continues to strongly support Israel’s right to exist within secure and internationally recognised borders. This includes standing by Israel in the face of biased and unfair targeting in the UN General Assembly and other international forums where Israel is bullied and where antisemitism is cloaked in language about human rights.

However, elections are a choice – and at this election, there is a clear choice.

You will have the choice between a Liberal–Nationals government that is delivering a strong economy, or Bill Shorten and the Labor Party who are proposing $387 billion in economy-wrecking higher taxes.

Now is not the time to turn back.

Only the Liberal–Nationals government has the plan to build a strong economy and secure your future.

ISRAEL is a longstanding and close friend of Australia. Through decades of conflict and peace, economic challenges and prosperity, Australia and Israel have stood together.

Our friendship is made stronger by Australia’s remarkable Jewish community – among the most significant and influential contributors to our national success.

The Australian Jewish community can have faith a Labor government will represent your interests, because our values also resonate with the story of Australian Jewry.

The Australian Jewish community came here from all corners of the world, fleeing in many cases the worst kinds of prejudice and persecution, in search of not just a safe haven but a country where they and their families could have an opportunity to prosper.

Granted that opportunity, our Jewish community demonstrated just how much they could contribute to our nation. I believe every Australian, whether they have been here for decades, years or months, should have that same opportunity.

My party’s long and proud history with our Jewish community is reinforced by our deep connection to Israel. Those ties of friendship the Labor Party forged with Israel, since before the modern state’s independence in 1948, will continue under my leadership to be as strong and as warm as ever.

In 1949, prime minister Ben Chifley said the new state of Israel would be: “A force of special value in the world community”.

Seventy years later, as we celebrate the free and prosperous democracy Israel has become, Chifley’s words still ring true: for me, for our party, for our country and for the world community.

Our bold reform objectives and the values which underpin them we share with the Australian Jewish community, and have been developed with representatives like Mark Dreyfus, Mike Freelander, Mike Kelly and the retiring Michael Danby, who I hope will be replaced this election with the accomplished Josh Burns.

My united team is drawn from all walks of Australian life. If we are privileged to form a government, we will lead a nation in which an Australian identity is a unifying feature, not a basis for us-and-them division; a nation reconciled with our First Australians; a nation which ensures economic growth works for everyone; and a nation willing to take real action on climate change, because it is good for our economy, vital for our environment and the right thing to do for our kids.

We in Labor believe we should embrace the multicultural diversity that has made us so strong, and reject attempts to divide us.

Unlike our opponents, we do not support the weakening of the longstanding protections against racist hate speech in section 18C of the Racial Discrimination Act.

We do not believe some imagined “right to be bigots” is more important than the right of all Australians to live in dignity and in safety, free from the toxic effects and dangers of racist hate speech.

Labor is ready to govern again for the good of all Australians. I hope the Australian Jewish community will support us in that great endeavour.