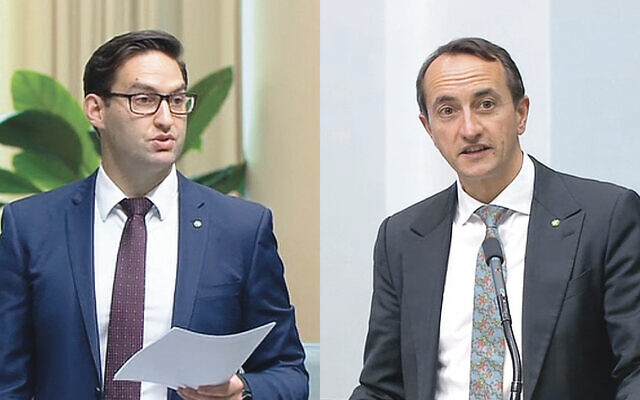 Josh Burns (left) and Dave Sharma have both condemned the attack. Photos: Screenshot

JEWISH communal leaders and politicians have expressed their horror at the terrorist attack in Tel Aviv overnight.

Two Israelis were killed and more than 10 were wounded when a Palestinian gunman opened fire on Ilka bar in central Tel Aviv in the latest eruption of violence to strike Israel in recent weeks. The terrorist was later found and killed in a shootout with officers.

“These attacks do more than orphan children and devastate families. They are aimed at the heart and soul of Israel. They are designed to spread hatred and fear,” he said.

“They are designed to weaken Israel, and undermine the Jewish connection to our homeland. But they will not. Even as they break our hearts, these attacks make our resolve stronger, and they make Israel stronger.”

He added, “Israel’s pain is exacerbated by the scenes of celebration on Palestinian streets. We unequivocally condemn these celebrations and call on all people who desire peace to do the same.”

Australia/Israel & Jewish Affairs Council executive director Colin Rubenstein also condemned both the attack and the celebrations in the Palestinian territories.

“We are appalled and saddened by this latest barbaric attack on innocent Israelis going about their lives. This again demonstrates the need for the stringent Israeli security measures that misguided critics are so eager to witlessly condemn,” he said.

“Also disturbing are reports once again of congratulatory statements issued by Hamas and Palestinian Islamic Jihad, both proxies of Iran, and of Palestinians celebrating in the streets. Terror attacks such as the recent spate don’t happen in a vacuum – they are a result of all-pervasive, systemic incitement to hatred against Israel by the terror groups and even by the Palestinian Authority itself.

“If the West really wishes to see these attacks cease, it needs to take concrete and effective action against this ongoing incitement.”

Macnamara MP Josh Burns expressed his shock at hearing “of another deadly attack”.

“My heart goes out to the families of the victims and I wish a speedy recovery to those who were injured. Violence and terror is never the answer, it only makes peace harder, and we in Australia will always stand steadfastly against terror wherever it strikes,” he said.

Wentworth MP Dave Sharma tweeted, “Another shocking and appalling terrorist attack in Israel, on Dizengoff St, in the heart of Tel Aviv. Condemn this absolutely and without reservation. Killing of civilians has no justification.”