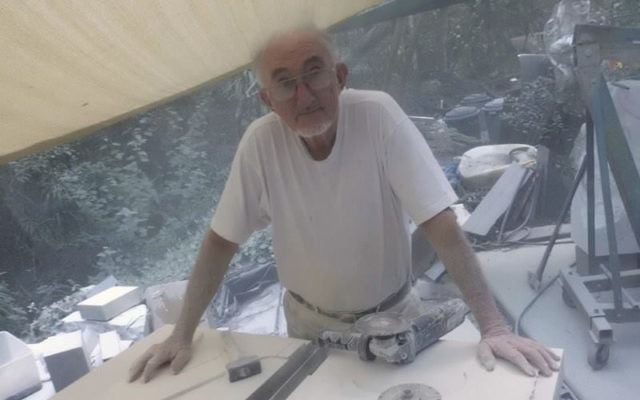 Graham Radcliffe, 80, was hosting a group of year 11 art students from Brisbane’s Gap State High School at his South East Queensland gallery last week when he made the comments, which included a warning to students not to “take everything they hear about the Holocaust as the truth and the numbers of dead are constantly being revised downward”.

He also asserted that there was “no evidence that Zyklon-B was ever used in Auschwitz”.

Radcliffe launched into the distressing tirade after showing the visiting students a sculpture called The Last Embrace, set in the Dachau concentration camp. He told The AJN his views had changed since he created the sympathetic piece more than 20 years ago.

“When I made the sculpture we were talking about I believed the official story. Since then, which was 20 years ago, I find there is room to doubt that. As life goes on we find the things we’re told are incorrect and I don’t believe in continuing a story, which may not be correct.”

When contacted by The AJN on Tuesday, Radcliffe stood by his comments, claiming he got his information “from the internet”, and cited the writing of notorious American Holocaust denier Eustace Mullins.

But Radcliffe, whose work is highly regarded in Queensland art circles, scoffed at suggestions that he himself was a Holocaust denier. “There’s room for doubt about the official story, that is a fact,” Radcliffe said.

Radcliffe also told the year 11 class that he crafted a piece promoting peace in the Middle East and tried to donate it, but that Israel rejected his offer. “Israel would not accept it, which tells you everything you need to know about Israel’s attitude to peace,” he explained to the students.

Gap State High School students have visited Radcliffe’s gallery several times in previous years, but acting principal Roger Atkins told The AJN there would be no further visits to the Mount Glorious site.

Chairman of the B’nai B’rith Anti-Defamation Commission Dvir Abramovich said, “I am shocked and appalled that schoolchildren were exposed to this shameful, vicious attack on the memory of the Holocaust. It is my hope that the Qld Education Department warns all schools about this man, unequivocally condemns these disgraceful comments and affirms its commitment to Holocaust education and to fighting anti-Semitism.”