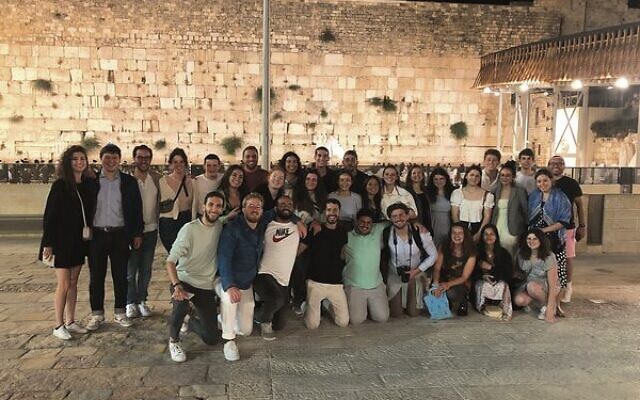 The WUJS group at the Western Wall.

At the beginning of June, I ventured to New York with Alissa Foster, AUJS vice-president, for the annual American Jewish Committee (AJC) Global Forum and then to Israel for the World Union of Jewish Students (WUJS) mini-congress.

This was my first time overseas since the pandemic began and I was so excited. Getting to New York was a bit of a drama with all of the well-known issues with long security lines and my luggage going missing for four days. Despite those issues, I was so excited to hear different accents and not to hear the words COVID-19 for my whole time being away!

When we arrived in New York, we were invited to a pre-AJC Shabbaton, which featured students from over 30 countries. Over Shabbat, we enjoyed being able to share stories of issues that we face and our success stories. Of particular interest to me, we were able to share our experiences with antisemitism. We noticed the similarities and differences in the way we all experience it. The presidents of the unions were particularly interested in the recent situation with the University of Melbourne Student Union, and the University of Sydney Student Representative Council, and were impressed to see that international apartheid week had not plagued our campuses.

It was sad to hear that across the globe all Jewish students are facing the litmus test, where we are excluded from progressive spaces because of our Zionist identity. We brainstormed ways of responding to this and how we can further the global student community’s advocacy skills.

We also had the pleasure of hearing from Yoni Hammerman, senior manager of WJC (World Jewish Congress) NextGen, which supports and helps train young Jewish leaders, and Daniel Radomski, head of WJC strategy and programs. We learnt a lot about the work that they are doing to combat antisemitism, and to support and foster Jewish life globally. We were also lucky enough to be joined by Jeffrey Greenberg, assistant director, campus affairs of the AJC, who prepared us for the AJC global conference, which was beginning on Sunday.

A standout moment of this Shabbaton was when we had a havdalah ceremony in Central Park opposite the Midtown Manhattan Apple store. It was a beautiful way to end the Shabbaton and it was special to be joined by Jewish people walking past. It always amazes me that even though we all come from different countries and speak different languages, we can all come together to recite havdalah.

From Sunday, June 10 until Tuesday, June 12, we spent our time at the AJC Global Forum, where we had the pleasure of meeting with the outgoing CEO of the AJC, David Harris, and the incoming CEO, Ted Deutch. There were also private addresses from the President of Ukraine, Volodymyr Zelensky; the US special envoy to combat and monitor antisemitism, Deborah Lipstadt; and Katharina von Schnurbein, the European Commission coordinator on combating antisemitism and fostering Jewish life. We also heard from Noa Tishby, Israeli-American actress, producer, activist, author, and Israel’s first special envoy for combating antisemitism and the delegitimisation of Israel, who upon hearing that Australians were in the room proceeded to shout out “Aussie, Aussie, Aussie” to have the rest of the students respond “oi, oi, oi” – after a few days of teaching them about Australian chants.

A highlight of the conference was the privilege of having a private sit-down meeting with David Harris. David gave us the platform to speak about our unique experiences as representatives of our respective countries. We had an open and frank discussion about the strengths and issues of the global community, and how we can better use and share resources.

We then travelled to Israel. It was such a privilege to be back in Israel, neither of us had been there since the beginning of the pandemic, so walking through the shuk (market) and eating Israeli falafel was a real treat. After the reality of actually being in Israel had sunk in, we were on our way to the WUJS mini-congress. This congress brought together student unions from around the world to have important conversations about the way our unions are growing, and the challenges that we are facing, as well as giving us the opportunity to meet with leaders who can best support our community.

While at WUJS, we met with the Ministry of Foreign Affairs and had a session run for us about the best ways to get our points across when dealing with antisemitism and anti-Zionism. We had the privilege of hearing from a Holocaust survivor who shared with us his story and his message for our generation, which was the importance of having Jewish pride. We had an amazing opportunity to experience a food tour of Machane Yehudah, where we enjoyed the shuk’s delicacies including falafel, marzipan rugelach and knafeh.

We then brought in Shabbat, with a beautiful Kabbalat Shabbat service where we sang the traditional prayers in both Ashkenazi and Sephardi tunes. We ended Shabbat by the Kotel singing havdalah. Overall it was a great privilege to be at WUJS, and to be able to meet so many people and make new friends from all over the world.

I finished my time in Israel by attending the first couple of days of the AUJS Israel Mission where I was able to see Israel through the eyes of those who had never been there. It was special to be able to share the country that I love with friends from Australia.

Natalie Gunn is president of the Australasian Union of Jewish Students.