Over time in our country, we've seen an erosion in tolerance. Australia is the most successful multicultural country on earth. Our differences are what make us strong and are what make us interesting. Governments can provide laws and funding, but only individual citizens can create that shared space for us to live together in harmony. 🇦🇺

FEDERAL MP Julian Leeser delivered a stinging rebuke of antisemitism in a speech in Parliament this week, stating that in almost 30 years in politics he has “never seen anything like this before”.

Noting Australia has witnessed a 60 per cent increase in antisemitic attacks in the last year, Leeser said, “Long discredited antisemitic ideas are now being given credence by the far left and the far right. 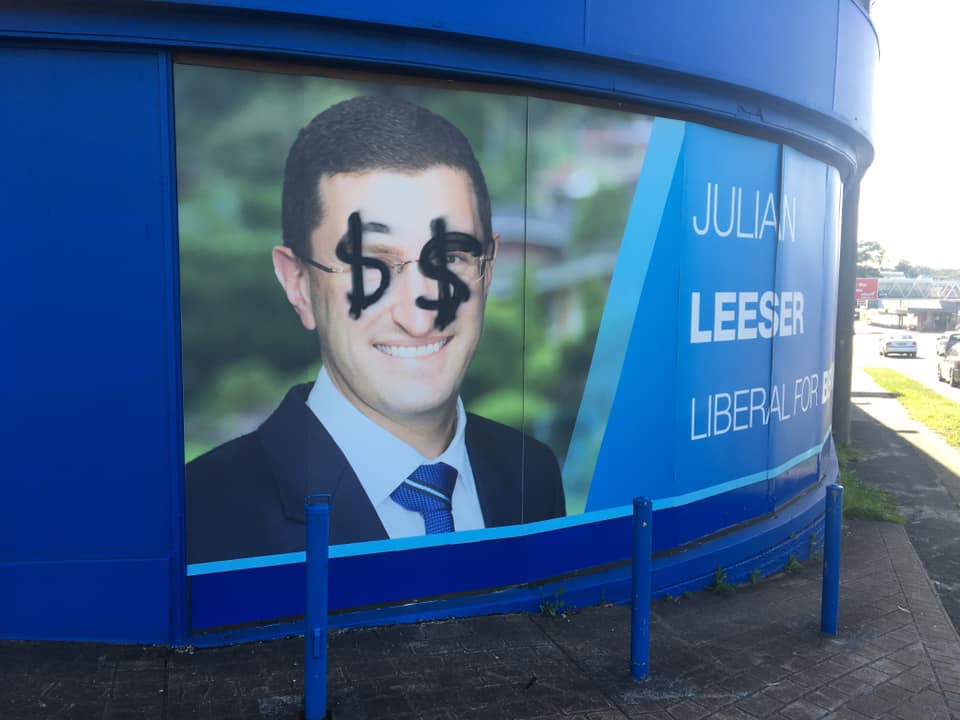 The poster for Berowra MP Julian Leeser defaced with dollar signs over his eyes.

He said the federal election campaign earlier this year “seemed to be a lightning rod for these activities”.

“I was one of several candidates who had posters defaced by people trying to intimidate me by sending a message of hate,” Leeser said.

“First it was swastikas and Hitler moustaches on my posters on a street in Normanhurst.

“Then my campaign office – private property not public property – was plastered with Antipodean Resistance stickers.

“And finally the photo on my campaign office was painted over with dollar signs.”

Leeser then turned to federal Treasurer Josh Frydenberg, who experienced similar attacks when his posters were daubed with dollar signs and other antisemitic messages.

“This was not because he is the Treasurer, it was because, like me, he is Jewish and like me he has been targeted by the merchants of hate,” Leeser said.

“The dollar signs refer to old antisemitic lies of an international Jewish banking conspiracy; that Jews have control of the world’s money supply.

“These sentiments were used by those who have sought to spread hatred of Jews for centuries.

“I have been involved in politics for 27 years but I have never seen anything like this before.”

Leeser added that Frydenberg “continues to be harassed by what is nothing more than an antisemitic legal action” questioning his eligibility to sit in Parliament over claims he is a dual citizen.

The Member for Berowra also referred to two “appalling” incidents of antisemitism in Melbourne state schools, in which a five-year-old boy was taunted by other children for being Jewish, and a 12-year-old boy was forced to get down on his knees and kiss the shoes of a Muslim student.

“When this type of hatred is appearing in children, we should be deeply concerned about the future of Australia,” Leeser commented.

“But as Jonathan Sacks, the former Chief Rabbi of the Commonwealth, has written, ‘The hate that begins with Jews never ends with Jews.'”