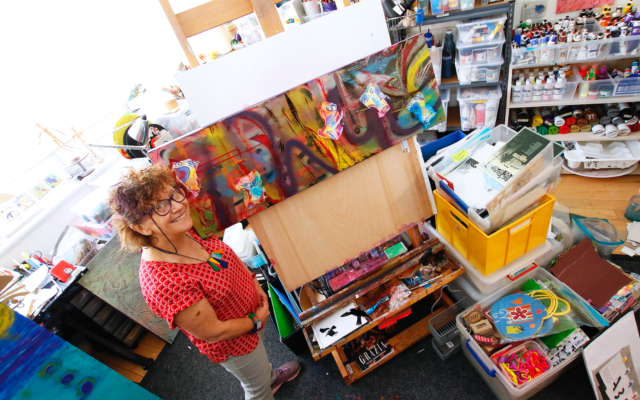 Lee Hirsh in her home studio with her winning artwork. Photo: Peter Haskin

AT the age of seven, after battling school work, everyday activities and struggling to catch a ball, Lee Hirsh, now 67, was declared legally blind. Hirsh would spend hours after school catching up on schoolwork, forgoing socialising and subsequently, sacrificing forming friendships.

Hirsh believes in retrospect her vision impairment developed after a car accident she was in as a baby, remembering her early childhood as a confusing time and school as a difficult place.

While her everyday struggles lay undetected by her teachers and family, Hirsh bloomed when it came to creativity. She told The AJN, “I didn’t find art, art found me.

“I look at something and it looks at me,” she said. “It’s talking to me. It’s insight without the sight.”

Told she had the enthusiasm but not the talent for art as a teenager at Mount Scopus College, she made the decision to move to Brighton Technical School for her final year, where she was able to explore her passion for art.

At her new school in the ’70s, Hirsh sadly remembers fearing for her safety after antisemitic bullying from the very first day onwards. She recalls another Jewish girl who kept her Jewishness a secret, saying, “If you value your life, don’t tell anyone you’re Jewish.”

On completing year 11 with a portfolio she was proud of, Hirsh contacted what is now known as the Victorian College of the Arts, aspiring to make something of her artistic passion. A year too young but told she had a good average, Hirsh was shown the door by the college principal.

“It was so deflating,” she reflected.

Looking to find a job in a creative industry, the legally blind artist made her way into an advertising department at a retail store where she worked as a copywriter, also doing paste-up and layouts.

Although she has no formal qualifications, over the past decades Hirsh has worked as a self-taught art teacher, assisting people of varying abilities in a range of environments, including at Jewish Care. She has also volunteered for a range of organisations, including the United Israel Appeal in raising funds.

Throughout her life, she has collected an array of miscellaneous items and created imaginative works of art. Encouraging a fascination for discarded everyday objects in her children, she taught them how to create “something from nothing”.

Her apartment is brimming with art materials and recycled items, bent, shaped and painted to become unique works of art, including a self-portrait sculpture made from scrap metal. Her walls are covered with eclectic artwork created in her busy studio.

Describing her inner dialogue, she said, “Things say, buy me or pick me up, do something with me. And I know where it should go. It’s instinctual with me,” she said.

Hirsh has been diagnosed as legally blind four times after confronting various eye conditions – leading to both physical and emotional challenges. But she says her determination enabled her to move forward in the art world.

After being misunderstood and unsupported by former partners and dealing with a range of mental health struggles, Hirsh said, “I’ve had to learn to reinvent myself in all aspects of my life.”

The Armadale local, also a creative writer who “paints with words,” has been entering art and writing competitions for years. Last month her colourful and unique entry, Finding Your Voice, won first prize in this year’s 2021 Mental Health Foundation Art Competition.

Overwhelmed with her win, the strong mental health advocate said, “You’ve got to find your voice,” hoping that others who have faced mental health struggles in their life find the confidence to “just be themselves.”

The competition was open to all mental health consumers/service users living in Victoria and encouraged entries that were focused on resilience in a post-pandemic world.