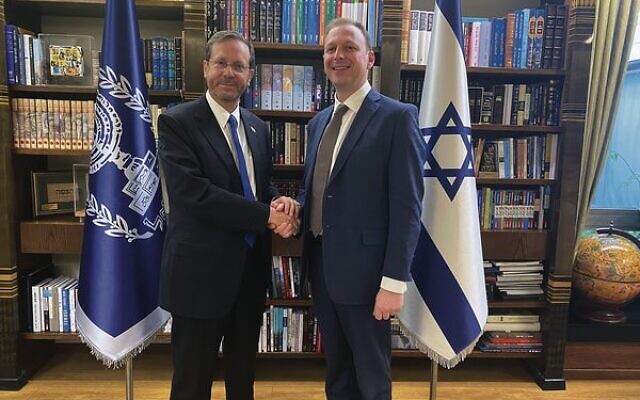 Zionist Federation of Australia (ZFA) president Jeremy Leibler was recently in Israel, where he met with Israel’s President Isaac Herzog and discussed ways to strengthen the Israel-Australia relationship, as well as the challenges faced by Australian Jewry, particularly regarding antisemitism on campus.

Leibler also met with the ZFA’s partners, the newly appointed chairman of the Jewish Agency Doron Almog and chairman of the World Zionist Organisation Yaakov Ha’Goel, to discuss ways to maintain the Australian Jewish community’s connection to Israel.

The ZFA is keen to increase the number of Jewish Agency emissaries in Australia, known as shlichim, after the number of shlichim significantly reduced when Australia closed its borders during the coronavirus pandemic. Commenting on his meetings with Israeli officials, Leibler said, “It is clear that Australia continues to be regarded by Israeli decision-makers as an exceptional outlier in the Diaspora regarding the strength of Jewish identity and connection to Israel.

“The Israeli government is also deeply appreciative and values the ongoing bipartisan support that the newly elected Albanese government has provided to Israel following the consistent and principled support provided by the Morrison government.”