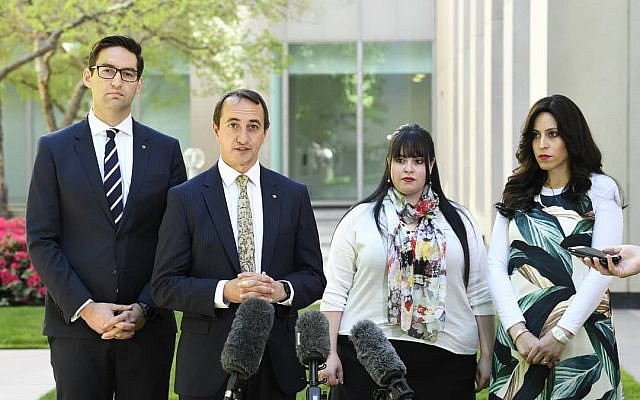 IN the same week that Malka Leifer is due to appear before a new psychiatric panel to assess her fitness to face extradition proceedings, federal Labor and Liberal politicians have publicly committed to supporting a Bring Leifer Back motion in Parliament early next year.

It comes after sisters Dassi Erlich and Nicole Meyer went to Canberra in October to raise awareness of the campaign to have their alleged sexual abuser extradited from Israel.

The motion will acknowledge “the bravery of Ms Leifer’s alleged victims – especially Dassi Erlich, Nicole Meyer and Elly Sapper for their tireless pursuit of justice”, note that “over five years have elapsed, and over 60 court hearings have been held in Israel, since this extradition request was first lodged, without any significant progress having been made” and “calls for the immediate extradition of Malka Leifer to Australia to face 74 charges of child sexual abuse”.

Burns said the motion will pass the house.

“Australians are united, and the Parliament will be united, in advocating for justice and for Malka Leifer’s return to Australia,” he told The AJN.

Erlich said she feels “incredibly supported” by the “huge show of support” of federal Parliament.

“The fact that people who have nothing to gain are supporting me shows they genuinely care; that is very heartwarming.”

The news comes on the back of the latest court hearing in Israel.

Israel’s Supreme Court on Tuesday upheld a previous ruling that Leifer should appear before a panel of psychiatrists to determine if she is faking her mental illness, and in turn if she is fit to face extradition proceedings.

While she welcomed the ruling, Erlich told The AJN that seeing updates of the hearing caused her more physical and emotional pain.

“I was sitting there and kind of wanting to see constant updates, but at the same time the updates made me physically ill and I didn’t want to have anything to do with it,” she said.

The judge will be told the panel’s finding next Tuesday. Lawyers are then expected to cross-examine the panel before the judge rules if Leifer is fit to face extradition proceedings.

Zionist Federation of Australia president Jeremy Leibler said the Jewish community “stands with the survivors and their campaign to bring Malka Leifer back to Australia to face justice”.

“Today was the 61st legal hearing on this matter, and the actual extradition trial hasn’t yet started,” Leibler said.

“It’s way past time to bring Leifer home, so she can stand trial in Australia, and her alleged victims can finally start putting this nightmare behind them.”