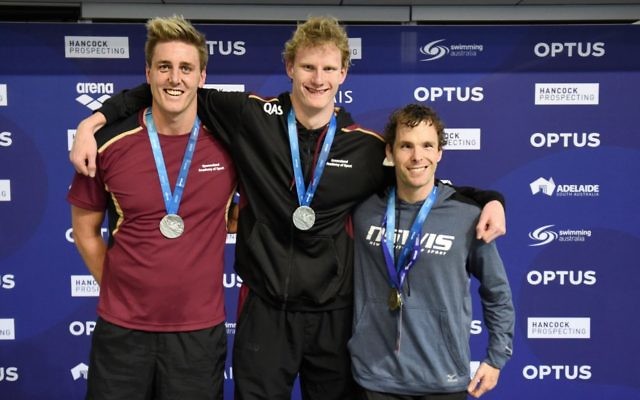 A TRIO of Jewish swimmers competed in the Australian team trials for the Pan Pacific Championships and Para Pan Pacs in Adelaide last week, all featuring in finals.

The 31-year-old, who has cerebral palsy and a vision impairment, earned a place in the Australian team for what will be his third consecutive Para Pan Pacs, to be held from August 9 in Cairns.

“I was proud of my performance,” Levy told The AJN, “and it’s great to put some consistent performances on the board”.

“The goal [now] is to improve on my personal bests and focus on the little things, such as my start and turns.”

After earning a spot in the women’s 100 backstroke B final on July 2 and coming 18th overall, 16-year-old Victorian Ashley Weill made the final of the women’s 200 backstroke two days later.

Fellow Victorian Benno Negri, 19, swam in three events, his best result being fourth in the B final of the men’s 50 free, finishing in 23.11 seconds. Australia team member James Roberts won the A final in 22.35 seconds.

Negri said it was a valuable learning experience to compete again with swimmers who are world class.

“The more you do it, the more used to that environment you get,” he said.

Negri also represented Victoria at the recent Singapore Championships, contributing to a gold medal win in the 4×100 medley relay and a silver in the 4×100 free relay.