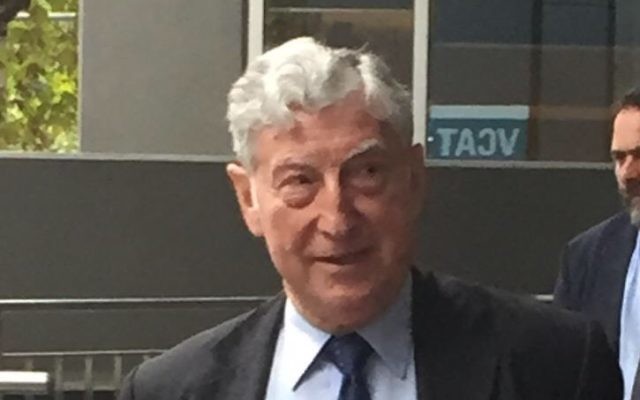 Melbourne lawyer Alex Lewenberg has apologised to a sexual abuse victim for saying he had no right under Jewish law to inform the authorities on a fellow Jew.

Lewenberg sat in court as a signed apology was read to a Victorian Civil and Administrative Tribunal hearing on Wednesday morning by his counsel Jeremy Ruskin QC.

In the apology, Lewenberg said his words to the victim, known publicly only as AVB, were “hurtful and damaging” and “completely unjustified”.

The hearing was also told Lewenberg had expressed remorse to a doctor friend of his and had sought the advice of a psychiatrist on the psychological effects his words might have had on AVB.

In a bail hearing for sex offender David Cyprys on September 6, 2011, Lewenberg, who represented Cyprys, was heard to tell Cyprys’s father that AVB, as a fellow Jew, should not have offered the court information regarding Cyprys’s likelihood to flee to Israel under the Law of Return.

VCAT previously heard that Lewenberg had said it was”most disappointing when a person who has nothing to do with the case and being a fellow Jew does wilfully seek to hinder another Jew in his defence of criminal charges”.

In a phone call on October 6, 2011, Lewenberg had admonished AVB and reminded him of the “moser” (informant) principle which he said was against Jewish custom.

VCAT heard previously that Lewenberg told AVB, “there is a tradition that you do not assist against [the people of ] Abraham.”

At Wednesday’s hearing into penalties, Ruskin asked the court to consider Lewenberg’s remorse and, at 75, his age and the likelihood that a suspension could end his career.

He said Lewenberg had not shown enough regret and had even accused a lawyer from the VLSC of anti-Semitism for raising his conduct with him.

He said widespread media coverage, including in The AJN, would be “educative” and a lengthy disqualification would deter other lawyers from this type of conduct.

He also pointed out that Lewenberg has been suspended from legal practice previously.

Judge Pamela Jenkins will rule on Lewenberg’s penalty at a later date.