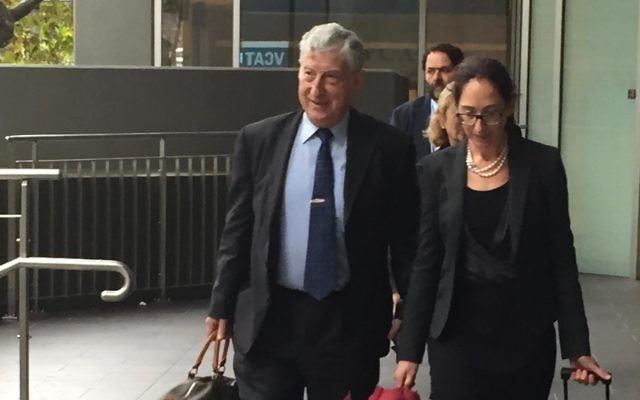 LAWYER Alex Lewenberg has been suspended from practice for 15 months for telling a child sex-abuse victim he should not help in the prosecution of a fellow Jew.

Tuesday’s decision by Judge Pamela Jenkins of the Victorian Civil & Administrative Tribunal (VCAT) to suspend his practising certificate comes on top of a two-year suspension over an unrelated matter in 1989, amid several findings of misconduct over the years.

Aside from the ban, which will take effect on June 1, Lewenberg was ordered to pay $55,000 to the Victorian Legal Services Commissioner (VLSC), who brought the case to VCAT. He has also been ordered to undertake a course in legal ethics.

For Lewenberg, 75, a former boxer, the penalties could be a knockout blow to his career.

The latest woes in a colourful life – in which Lewenberg has survived a stabbing, a shooting and the bombing of his home – stem from his representation of now jailed sex offender David Cyprys.

At a bail hearing in the Melbourne Magistrates Court on September 6, 2011, the victim at the centre of the suspension case, known in public only as AVB, had offered information heard by the court, that Cyprys may attempt to flee to Israel.

Lewenberg, who was representing Cyprys, had turned to his client’s father and remarked that it was “most disappointing when a person who has nothing to do with the case and being a fellow Jew does wilfully seek to hinder another Jew in his defence of criminal charges”.

Then on October 6, 2011, in a phone call with AVB, Lewenberg told him “there is a tradition … that you do not assist against [the people of] Abraham”. Later in the conversation, Lewenberg told AVB the “moser [informant]” principle “is well known”. Audio recordings of both the bail hearing and the phone call were made and VCAT was told Lewenberg does not dispute the facts of the case.

Judge Jenkins found Lewenberg guilty of professional misconduct, stating such a view “is antithetical to the principle of equality before the law, so fundamental to a democratic society such as Australia”, and adding that “justice should be dispensed objectively, without fear or favour and without regard to any characteristic such as race or religious faith”.

She said it was “discreditable for [Lewenberg], practising law as he does in a 21st century secular society, to nevertheless proselytise his misguided concept of religious or cultural solidarity, thus effectively allowing such views to take precedence over his professional obligation to uphold the principle of equality before the law”.

At a penalty hearing last week, Lewenberg’s counsel Jeremy Ruskin QC read out a signed apology from the veteran lawyer in which Lewenberg said his remarks to AVB were “hurtful and damaging” and “completely unjustified”.

The court also heard Lewenberg had confided in a friend, expressing remorse about his remarks, and had sought the advice of a psychiatrist on how his words might have impacted AVB.

However, Nicholas Green QC, representing the VLSC, said Lewenberg had not shown enough regret and had accused a VLSC investigation of his conduct towards AVB of anti-Jewish motives.

At the time of going to press, it was unclear whether Lewenberg would launch an appeal to the Supreme Court’s Court of Appeal.

In the print edition of this week’s AJN it was wrongly reported that AVB “had offered incorrect information heard by the court that Cyprys could use Israel’s Law of Return to flee Australia”. In finding Lewenberg guilty of professional misconduct, the judge was unequivocal that AVB gave wholly correct information to the court and any assertion to the contrary is erroneous. The AJN apologises for the error.