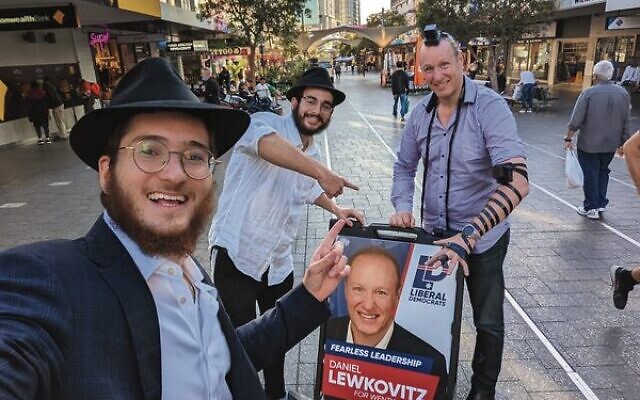 “All of my corflute signs have been torn down overnight so I must be scaring someone,” Daniel Lewkovitz told The AJN this week.

The Jewish Liberal Democrats candidate threw his hat into the ring for Wentworth earlier this year after growing disillusioned with the state of politics in Australia.

He said Australia “has been exceptionally good to my family”, but is travelling in a “concerning direction”.

“When I look at some of the things that have happened in this country over the years, there have been policy decisions, which, if they happened in America, you would have a million people marching in the streets,” he said.

“We are a very politically stable country. The quality of living here generally is very good, but on the other hand, we have a situation where politicians are not terrified of citizens, and they should be.”

He pointed to a culture of stagnation in Canberra.

“Nothing changes. We have weak opposition because governments stay in term in this country for so long that why would anybody put their hand up to lose?” he said.

“So the opposition gets weaker and weaker, which means the government isn’t worried about them. And at the end of the day, I think Australians are the losers, so I think it is time for a really viable third alternative.”

On the hustings he said he had met “a number of frustrated Liberal voters who are looking for an alternative but aren’t willing to risk the climate independents, Labor, [or] Greens.

“The Liberal Democrats offer freedom and sensible policies for tax, education and nuclear energy,” he said.

“I think the Liberal Democrats are continuing, in some respects, ideology which the Liberal Party has completely forgotten.”