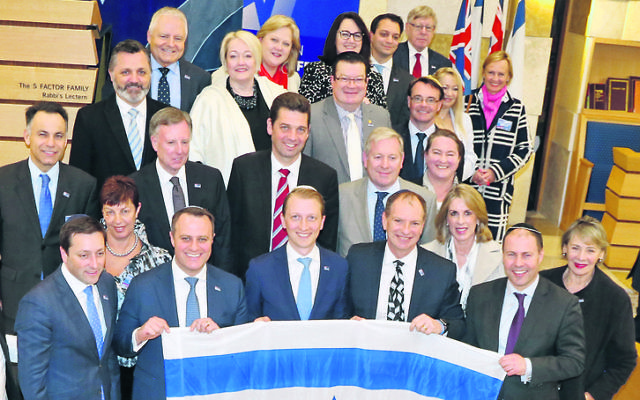 The launch of Victorian Liberal Friends of Israel. Photo: Greg Every

Referencing the anti-Israel stance of the Greens, Paterson said, “As you all know, Michael Danby is retiring [as MP for Melbourne Ports] and sadly there is a very real risk that the Greens … could end up winning the seat and representing the second-largest Jewish seat in Australia. We must not allow that to happen.”

“But nothing that Israel stands for we can take for granted,” he said, listing BDS, Iran’s “Shi’ite axis”, and the politics of “the divisive and despicable [former senator] Bob Carr” as challenges.

Referring to the Liberals as “a Zionist political party” several times, state Liberal leader Matthew Guy lauded the friends organisation as “a group for all faiths who call Israel home”, repeating his pledge that, if elected, he would locate a state trade office in West Jerusalem, “the undisputed capital of Israel”.

Former Australian ambassador to Israel Dave Sharma lamented “too much heat and not enough light” when Australians discuss Israel, “the only country in the Middle East that truly shares our values”.

Southwick emphasised the importance of a Victorian friends group. “When Israel is attacked, it comes home here in our state”, on campus and in attacks on shules.

Zionism Victoria president Sharene Hambur said, “So often media reports fail even to attempt to provide a balanced view, [so] groups such as the one being relaunched tonight play an incredibly valuable role.”

“I say to Israel and the Jewish community, there are many of us, you are not alone,” she said.