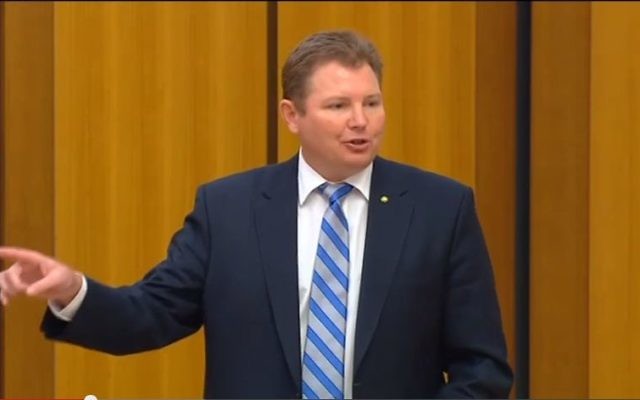 LIBERAL MP Craig Laundy has been slammed after alluding to the fact that “the issues that we as a globe confront today” can be traced back to the creation of the State of Israel.

In a speech in the Federation Chamber of Parliament earlier this month supporting a motion to recognise 2014 as the International Year of Solidarity with the Palestinian people, the Member for Reid in Sydney’s western suburbs, admitted he has never been to the region but that many Palestinians “call my electorate home”.

Laundy, who is co-chair of the federal Parliamentary Friends of Palestine, said, “A people were displaced and they have been fighting for their identity ever since. That is it simply. If you look at the Middle East and the issues that we as a globe confront today, we can trace it pretty much back to this region some 60 or 70 years ago. Anyone who stands in this place and argues differently is not being fair dinkum.”

Referring to a two-state solution, Laundy said: “I believe this is used as a line to hide behind; it does not get past that. This is an issue we need to attack; we need to be real about it … for the last almost 60 years, the people of Palestine have not had a fair go.”

Asked by The AJN if her colleague’s opinions represented the party line, Minister for Foreign Affairs Julie Bishop said simply: “The Australian government’s long-standing position is that we remain committed to Israel and a Palestinian state existing side-by-side in peace and security, within internationally-recognised borders.”

Executive Council of Australian Jewry president Robert Goot said Laundy’s claim that the Palestinians have not been given a “fair go” is not credible, adding that if he is to follow his own advice that Australian politicians should be “fair dinkum” about the conflict, then “honesty and accuracy about its history are essential”.

Rubbishing Laundy’s claim that a two-state solution is used as a line to hide behind, Goot said: “It is the internationally endorsed basis for resolving the conflict and the only way of achieving the right of national self-determination, freedom and dignity for both peoples. The Palestinians have rejected one opportunity after another to achieve a two-state solution, and have instead chosen the path of war, terror and incitement, resulting in terrible suffering for both peoples and self-inflicted statelessness for the Palestinians.”

Challenged by The AJN over his comments, Laundy insisted he did not disagree with the government over a two-state solution.

“What I mean by this statement is that I would like to see more done,” he said, adding, “I never have, nor will I, place the blame for the range of current issues in the region solely with Israel or any other state.”