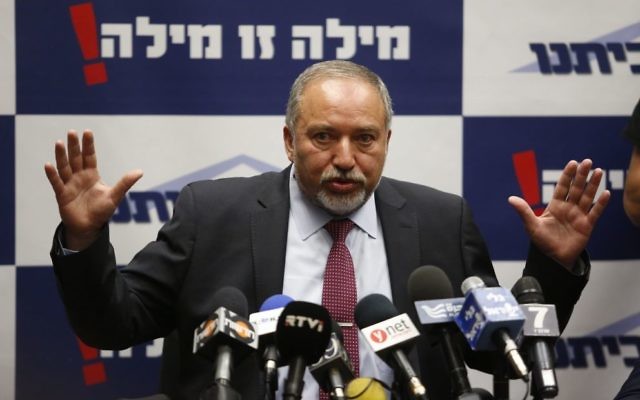 Israel will help to rebuild Gaza if Hamas disarms, the Israeli Defence Minister Avigdor Lieberman has told a Palestinian newspaper.

“If Hamas stops digging tunnels, rearming and firing rockets we will lift the blockade and build the port and airport by ourselves,” Lieberman said to Al-Quds, one of the most popular newspapers in Gaza and the West Bank

The interview sparked fury among Palestinians, firstly because Al-Quds  controversially agreed to publish an interview with an Israeli leader who they widely revile, and secondly because of the demands that he voiced.

Hamas called Lieberman’s offer “blackmail” and its spokesman Hazim Qasim said that Palestinians must hold on to arms as a means “to be able to defend themselves against continuous Israeli assaults.”

Lieberman has never given an interview to a major Palestinian newspaper before, and Israeli analysts were taken aback that he did — especially now, when he is in the most important political job he has ever occupied.

“The timing of this and the newspaper he decided to talk to surprised everybody,” Hebrew University political scientist Abraham Diskin told The AJN.

Diskin says that Lieberman spoke of a scenario so farfetched he knew it will it will never happen. “It’s like saying to someone, ‘if the moon drops out of the sky I will marry you.’”

But Lieberman is believed to have been more focussed on trying to turn Palestinians against their leaders than trying to convince the leaders to change their ways.

His offer to change Israeli policy in Gaza was part of a wider argument that Gaza residents face the hardships of their lives because of the fact that Hamas prioritises military might over people. Lieberman is keen to shake the support of Palestinians for their regimes, and took a swipe at the two rivals forces in Palestinian politics, namely President Mahmoud Abbas as well as Hamas, saying that ordinary Palestinians should tell them to shun “crazy” policies.

“The agreement needs someone else, someone capable of taking a tough decision,” he said.  Lieberman portrayed Abbas’s Palestinian Authority as weak, and Hamas as an endangered regime should it chose to start another round of fighting with Israel.

Such a confrontation “will be their last… because we will completely destroy them,” he insited.

Lieberman reiterated his support, in principle, for a peace deal that involves a Palestinian state being established alongside Israel.

He stressed his position that this should involve, when final borders are set, some sovereign Israeli territory being passed to the Palestinians and some West Bank settlements being retained by Israel.

Diskin believes that the interview had a subtext: it was a case of Lieberman flexing his muscles in the face of his political boss, Prime Minister Benjamin Netanyahu, who tends to keep his ministers on tight leashes and can come into conflict with them for doing so. Lieberman, however, is an ambitious maverick who sees himself as future Prime Minister, and wants to show his independence.

“He was testing Netanyahu,” Diskin suggested, “and saying, ‘I’m doing something like this without coordinating with you and I’m an independent player.’”