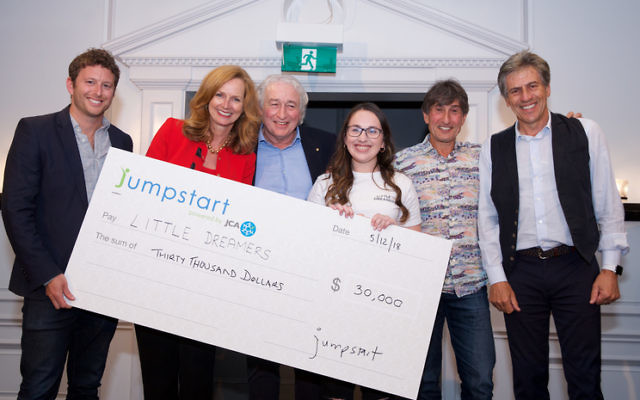 MELBOURNE-based Madeleine Buchner, founder of Little Dreamers – an organisation supporting siblings of sick children, and kids who care for unwell parents – may soon have some big dreams realised after recently winning first prize of $30,000 at JCA’s Jumpstart pitch event.

Sharing her personal story that tugged at the heart strings, the seed for Little Dreamers was planted when Buchner was 16-years-old, and a young carer herself.

“I would sit in the backseat with my brother while he was having a seizure and give my mum updates while she changed directions and drove us to the hospital,” relayed Buchner.

“Little Dreamers now – nearly 10 years from launch – supports 4000 incredible young carers every single year across a range of support programs,” said Buchner, who was up against tough competition posed by four other promising projects.

The funding will allow Little Dreamers to hire a part-time employee in Sydney, and reach the same level of impact here – where 100 young people are currently supported – as in Melbourne.

Shark and founder of RedBalloon, Naomi Simson, commended Buchner’s “terrific effort, [which was] so focused”, only to be challenged in true shark style moments later.

“It’s an amazing cause, [but] I’m going to disagree with Naomi because I know [she] said you’re really focused,” remarked judge and venture capitalist David Shein, advising Buchner to focus on a few impactful programs, rather than dispersing resources widely.

Coming in at second place with the $15,000 prize was The Good Box, set to be a game-changer in the homelessness space.

“We sell boxes filled with great items for the public to purchase and give directly to those experiencing homelessness,” said Maddy Jones, and her co-founder Gali Blacher remarked, “It’s all about breaking barriers, abolishing stigmas and having life-saving conversations.”

Capturing hearts and minds with her creative vision, founder of the Single Sock Solution, Romy Wolman, took home the people’s choice award of $5000, impressing the audience with her prototype blanket and a dress entirely crafted from socks.

Realising the great healing power of weaving to unite people with and without disabilities, Wolman’s innovative idea was set in motion.

“[We need to] collect unwanted socks and weave them into magnificent rugs, baskets, blankets, and more, and then sell them and return the profits to the community,” she said.

Summing up the evening’s fierce competition, Peter Ivany, another shark and executive chairman of IIG, concluded: “The presentations were outstanding and our community is in wonderful shape.”