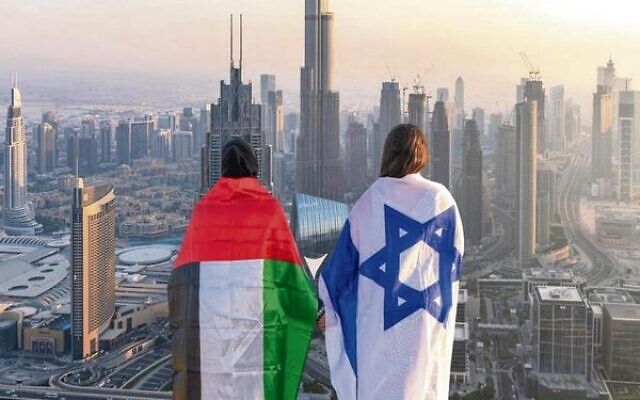 The Abraham Accords have led to a warm peace with the UAE. Photo: Abdullah Sameh Houssny/@dubai.uae.dxb

Hail the Duolingo revolution! The mobile app is the latest to disrupt an established field. This time, it’s the teaching of languages. No longer are dusty tomes or lengthy lectures required to learn a new tongue; a short lesson each day interacting with one’s phone leads to knowledge and even proficiency in a foreign language.

So I’ve joined the bandwagon and downloaded the app. I hope to use it to brush up my Hebrew, but especially to acquire at least some experience of a language which is completely unknown to me, yet one that should be familiar – Arabic.

Clearly a few minutes a day is only going to lead to fragments of conversational Arabic after a long time, but nevertheless I am looking forward to the challenge. This is not merely because, as a teacher, I know that all learning is worthwhile, and nor just because Arabic is a close cousin of Hebrew and discovering parallels between the two is fascinating. It’s because as I plan to live in Israel at some stage in the future, I want to be able to converse with those with whom I will share the country, Hebrew-speakers and Arabic-speakers. (I’m already qualified to speak to Anglophones, but Russian, sadly, will have to wait.)

This is the reality of Israel today, and one that would surprise many who only know of the country from news reports or from the cries of anti-Israel campaigners. Although it is a Jewish state (a concept that is hard to define precisely, but should be no more objectionable than saying, for example, that Greece is a Greek country), it is populated by Jews and Arabs. Together. And the absurdity of the slander of “apartheid” is manifest on every street, where hijab-clad women wait at the same bus stops as Charedi Jews; in every hospital ward, where Arabs and Jews can be found among both the patients and the medical staff; even on the Supreme Court, where judges who are Muslims, Christians or Jews decide cases of the utmost significance to the state.

On my recent visit to Israel, during a short stay in a hotel (being with the grandchildren is the greatest pleasure, but a brief break also has its attractions), it was not just the staff that comprised Jews and Arabs, but the guests too. One man apologised profusely that he could not help a group of Jews make up a minyan because, as a Muslim, his presence would not be of much help.

Whether a final peace settlement is two states, or one state, or even if the status quo continues for a long time (the outcome presumed by most Israelis and their politicians) one reality is certain. Millions of Jews and Arabs will inhabit the land between the Jordan and the Mediterranean and will live and work together. This is why many (though not all) Arabs strive to learn Hebrew and a growing (but still small) number of Jews endeavour to speak Arabic. These linguists know that, whatever one’s politics, understanding and communication between neighbours and colleagues, at a minimum makes life more pleasant, and, looking to the future, is an essential requirement of a true peace, beyond the formalities of some ceasefire or treaty.

And not only is this essential for harmonious relations within Israel, but the changing view of the Jewish State within the Arab world has made the ability to converse in the vernacular necessary in foreign relations as well. The Abraham Accords have led, with remarkable speed, to a warm peace with the UAE and Bahrain. The clearest difference between this and the “cold peace” with Egypt and Jordan are the throngs of Israelis visiting these Arab countries and the welcome they receive.

For tourists from our part of the world, flying to Israel via Dubai has so rapidly become the natural route that the wonder of this new situation has already dissipated. Last week I sat in Dubai airport, asking for, and receiving, kosher food, after praying in public while clad in tallit and tefillin – a scene that would have been fantasy only a few years ago.

A visit to Israel reminds one that while some aspects of the country change at dizzying speed, others stay the same. The lack of progress towards a peace settlement has not altered. But at the same time, the realisation among both the Jewish and Arab communities that the other is here to stay is gaining wider acceptance. Israeli connections with the Arab world are growing by leaps and bounds. These trends lead to a willingness to see the humanity of “the other”, and from there to a desire to speak each other’s language.

So at some time in the future, when I’m in conversation with a member of Israel’s Arab community, or an Arab fellow-passenger on a plane, I hope I’ll be able to say more than “shukran” (thank you), because watching Fauda will not be my only source of Arabic.