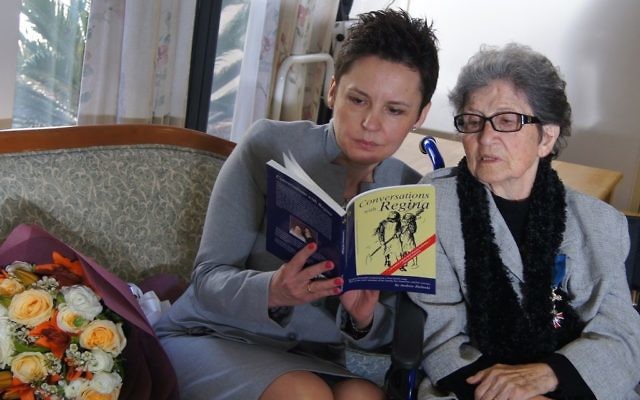 MRS Regina Zielinski, the only known Australian survivor of the Sobibor extermination camp, has passed away peacefully at the age of 89.

Only last month The AJN reported Mrs Zielinski was awarded the Knight’s Cross of the Order of Merit of the Republic of Poland for bravery and heroism shown during the historic Sobibor uprising, as well as her extensive efforts in educating about the Holocaust.

Born in Siedliszcze, Poland, Mrs Zielinski was 17 when she was deported from the local ghetto to the camp in eastern Poland in 1942. There, her family members were among the 250,000 prisoners who perished.

She managed to escape selection for the gas chamber when her mother volunteered her to knit socks for the SS in the camp, and later to sort ammunition.

On October 14, 1943, under the most adverse conditions, prisoners in Sobibor killed 11 SS guards and police auxiliaries – an act of defiance that prompted the Nazis to destroy the camp soon after.

Mrs Zielinski was one of a few hundred to escape into the forest, but only among about 50 who survived. She got through the remainder of the war by receiving false identity papers from her neighbour, who had a daughter of a similar age and name. This new identity – that of a Catholic Polish girl – allowed her to travel to Germany, where she found a job as a nanny in Frankfurt.

One of the few living survivors of the uprising, Mrs Zielinski lectured for more than two decades on her own story and on the values of tolerance to school and university students around Australia. She was also a guide at the Sydney Jewish Museum for many years.

Mrs Zielinski moved from Adelaide to a nursing home on the NSW Central Coast this year to be closer to her grandson, Nicholas. A memorial service was due to be held today (Thursday) in Erina.

“It is of course a tragedy that she has gone, but her memory and legacy survive through her son and daughter,” said son Andrew, who authored Conversations with Regina, his mother’s life story.

He praised his mother’s “indomi-table spirit” which he says enabled her to overcome so many hardships throughout the course of her life.

“I am not only left with sadness but a raising of hope that life has endless possible alternatives,” he said.