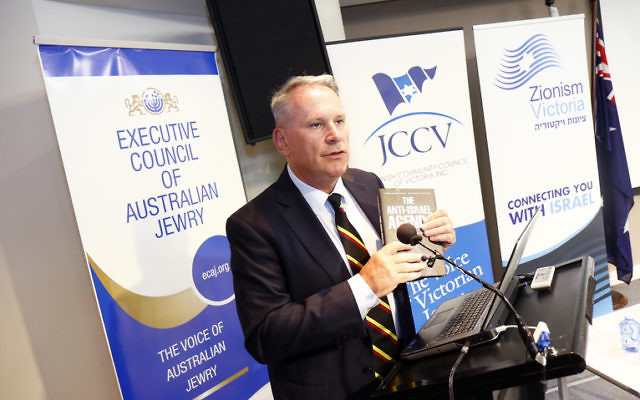 HOLDING aloft Alex Ryvchin’s new book, The Anti-Israel Agenda: Inside the Political War on the Jewish State, Colonel Richard Kemp, one of its contributors, referenced Benjamin Netanyahu’s Munich speech in commending the collected essays to attendees at its Victorian launch.

Kemp described Netanyahu’s February 18 appearance at the Munich Security Conference, where the Israeli PM held up a piece of an Iranian drone fired on Israel from Syria, warning the Jewish State’s enemies not to “test Israel’s resolve”.

Waving the book, the visiting Briton exclaimed, “That is also a weapon — that is a weapon you need to arm yourself in your fight to defend the State of Israel.”

The former chief of command for British forces in Afghanistan, whose testimony before the UN Human Rights Council probing the 2014 Israel-Gaza war is detailed in Ryvchin’s new work, paid tribute to the Ukrainian-born Australian writer and lawyer, who is the public affairs director of the Executive Council of Australian Jewry (ECAJ).

Liberal and Labor MPs, including Michael Sukkar (Deakin), Michael Danby (Melbourne Ports), Tim Wilson (Goldstein), and Victorian senators Kimberley Kitching and James Patterson, were on hand for the launch, co-hosted by ECAJ, the Jewish Community Council of Victoria, the Zionist Federation of Australia and Zionism Victoria.

Sukkar described Israel as “the frontline of freedom in the world … yet there’s no nation probably on the earth that’s under a greater existential threat … works such as what we’re launching tonight … are so important in pointing that out”.

Danby reflected, “One of the great things about Alex’s book is that it traverses so many areas where this insidious and fanatical anti-Israel movement takes place — in the unions, in the universities, all through political life in western democracies.”

ECAJ president Anton Block said the Boycotts, Divestment and Sanctions movement, which is examined in detail in Ryvchin’s book, is not accepted in the policies of any Australian political party but he is concerned by moves at state Labor Party conferences and at the 2015 ALP national conference advocating that Australia recognise a Palestinian state outside of a negotiated settlement.

The Anti-Israel Agenda was launched at the Sydney Jewish Writers Festival last year.