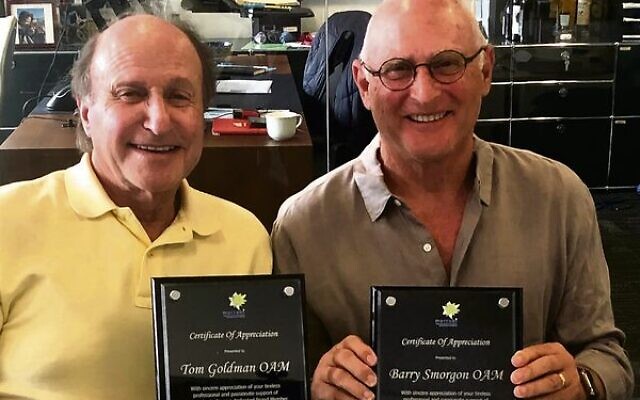 Tom Goldman (left) and Barry Smorgon with their awards at the 2021 Maccabi Australia AGM.

MACCABI Australia honoured two of its departing, long-serving board members at its AGM on Sunday, December 12.

Outgoing chairman Barry Smorgon (pictured on right) received the organisation’s highest honour of Life Membership, plus a Certificate of Appreciation, in recognition of his considerable contribution, and professional and passionate service.

Maccabi Australia president Jeff Sher said Smorgon has been volunteering at Maccabi since he was 14 and “he has been a confidante and mentor to me – always there to lend a hand, at all levels of Maccabi”.

Smorgon remains the head of the Australian delegation for the 2022 Maccabiah Games, and a member of the Board of Governors.

Tom Goldman (pictured on left) also received a Certificate of Appreciation, for his tremendous support for Maccabi Australia for 50 years, and his exemplary commitment to Maccabi’s leadership, in Australia and abroad.

Praising Goldman, Smorgon said, “Tom has done so much for Maccabi . . . he is a kind and decent human being – a true mensch”.