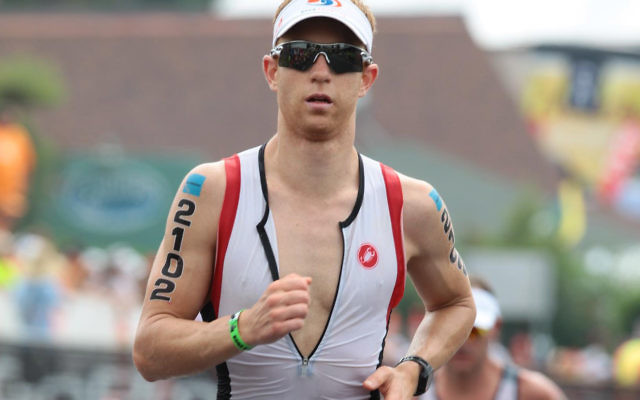 Jewish Sportsman of the Year Amos Gollach in action.

MACCABI Australia handed out its annual sports awards at ceremonies around the country, in recognition of the outstanding achievements of Jewish athletes in 2013. Triathlete Amos Gollach (WA) and slalom canoeist Jessica Fox (NSW) headlined the awards as recipients of Sportsman of the Year and Sportswoman of the Year, respectively. In October 2013, Gollach finished first at the Hawaii Ironman in the 18 to 24 age group, placing him at the top of the overall Ironman world ranking for his age category. The 24- year-old also set a group course record of nine hours, six minutes at the 2013 Cairns Ironman.

Jewish Sportsman of the Year Amos
Gollach in action.

Fox, 20, had a remarkable 2013, winning the overall world cup title in the canoe slalom C1 category. During her campaign, the Aussie paddler claimed her first World Championship C1 titles in Slovakia and Austria, and also placed first at the under-23 C1 Women’s World Cup. Cyclist Riley Hart (VIC) and swimmer Benno Negri (VIC) shared honors for the Junior Sportsman of the Year, with Hart’s success on the European Junior Tour and Negri’s accomplishments at the Victorian State sprints making the pair impossible to split. The Junior Sportswomen of the Year went to gymnast Deborah Greenbaum (NSW), who won gold at the 2013 Australian Championships in the elite Junior International Division. Squash legend Alan Oshlack (VIC) picked up the Masters Sportsman of the Year for his triumphs at state-level and national-level masters squash championships, while the Masters Sportswoman of the Year went to Dafna Orbach (NSW), who won a number of prestigious lawn bowls tournaments in 2013. Honours were also given for those athletes and administrators who performed under the Maccabi banner. Adriel Young’s (NSW) two triathlon gold medals at the 2013 Maccabiah Games and a first place at the Asia Pacific Ironman Championships in Auckland earned him the Maccabi Sportsman of the Year. Swimmer Marni Burger (VIC) received the Maccabi Sportswoman award, after winning a series of medals at the 2013 Maccabi AJAX Championships and the Maccabiah Games, where she became the first Australian open category medallist in 20 years. Swimmer Jeff Sher (VIC) and lawn bowler Ray Jankelowitz (NSW) were joint recipients of Maccabi’s Masters Sportsman of the Year, while gun swimmers Jordan Hazan (VIC) and Mikaela Rifkin were rewarded Maccabi Junior Sportsman of the Year and Maccabi Junior Sportswoman of the Year, respectively. Maccabi Administrator of the Year was awarded to President of Maccabi NSW Danny Hochberg, who spearheaded the 2013 Maccabi Junior Carnival organising committee in Sydney.