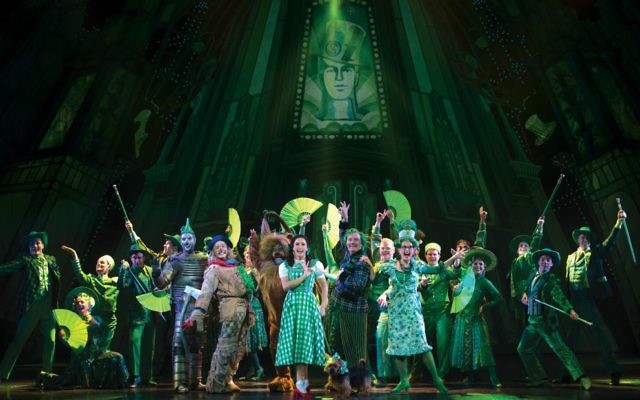 A scene from the musical The Wizard of Oz. Photo: Jeff Busby

THE popular musical The Wizard of Oz opens at Melbourne’s Regent Theatre this week with musical theatre star Anthony Warlow playing The Wizard and Professor Marvel, Lucy Durack playing Glinda the Good Witch and Jemma Rix as the Wicked Witch of the West.

It has been 16 years since The Wizard of Oz last toured Australia, and this revised Andrew Lloyd Webber version had its world premiere at the London Palladium Theatre in 2011.

When a tornado rips through Kansas, Dorothy and her dog, Toto, are whisked away in their house to the magical land of Oz. As they follow the yellow brick road to the Emerald City, they meet Scarecrow, Tin Man and a cowardly lion.

This production injects some new surprises to the story made famous by the classic 1939 movie and earlier stage productions, plus some additional songs by Tim Rice and Lloyd Webber.

Jewish actor Rubin Matters is a member of the ensemble, performing in many of the show’s scenes.

“I pinch myself to believe that I am sharing the stage with some of our leading actors every night,” he said.

This production of Wizard of Oz has already toured Brisbane, Sydney and Adelaide.

“The response from the audience on opening night in Brisbane was incredible,” said Matters. “Everyone loved the show. So many people grew up watching The Wizard of Oz movie as well as the original show, so it has always been a favourite.”

Matters, 24, grew up in Bentleigh and studied at the Victorian College of the Arts Secondary School. He also performed with the Ministry of Dance and Howard Fine Acting Studio.

His acting roles include Chitty Chitty Bang Bang, Hollywood Honky-Tonk and Georgy Girl – the Seekers Musical, which toured Australia for seven months after it premiered in Melbourne in December 2015.

“I have always loved musical theatre and I want to continue in this area, as I can utilise my skills in acting, singing and dancing in the one show. However, I would be happy to explore TV and the theatre in the future.”

Warlow has been thrilling audiences since the 1980s, starring in musicals including Les Miserables, The Phantom of the Opera, Doctor Zhivago and recently as Tevye in Fiddler On The Roof. He made his Broadway debut in 2013 in Annie in the role of Oliver “Daddy” Warbucks.

Durack starred as Glinda the Good Witch in the original Australian production of Wicked and has starred in other musicals including Legally Blonde and 42nd Street.

Rix has spent much of her professional career performing Elphaba in Wicked in the Australian premiere tour that started in Melbourne in 2008 and continued to Asia and New Zealand before returning to Australia for its 10-year anniversary national tour.

The Wizard of Oz premieres at the Regent Theatre, Melbourne on May  17. Bookings: www.ticketmaster.com.au.