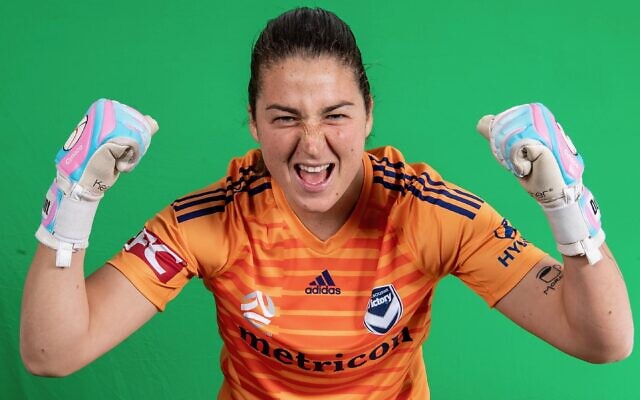 “IT’S an absolute dream come true,” experienced W-League goalkeeper Melissa Maizels told The AJN about signing a one-year deal with Melbourne Victory for the upcoming season, which kicks off in mid-November.

“A lot of players dream of representing their childhood club, but it doesn’t always happen.”

The 26-year-old – who was the Australian team’s keeper at the 2017 Maccabiah Games in Israel not long after discovering that her grandparents were Jewish – got her first professional contract with the Victory as a teenager in 2012, but did not get to play any games for them at the time.

Since then, she has played more than 20 W-League matches for Perth Glory and Canberra United, but said until this season, “the timing had never been quite right” to consider a move back to the Victory.

In recent months, Maizels reached out to the Victory’s W-League head coach Jeff Hopkins, who invited her to a series of trials, before deciding she was “the right fit” in his plans for season 2019/20.

“Now I just want to be there for my teammates, train hard to be in the best position to play in as many games as I can, but most importantly to play a role in seeing the side be as successful as possible.”

Hopkins said he was thrilled to have two proven goalkeepers in his squad in Maizels and Casey Dumont, who will begin her third season at the club.

“Melissa has developed her game well between stints with Perth Glory and Canberra United,” Hopkins said, adding he believes the pair will complement each other well throughout the season.

Maizels said her team feels hungry to complete “unfinished business”, having finished in first place at the end of the 2018-19 regular season, before bowing out in the semi-finals.

“To go one better and do the double [win the premiership and championship] this season – that’s been our plan from day one of pre-season training.”

Maizels has kept herself very busy during the W-League off-season, as a foundation coach with Absolute Soccer, as a player and head coach for Southern United’s senior women’s team, and as technical director for Mount Martha Soccer Club in Victoria’s Mornington Peninsula.

“It’s been so rewarding to play a coaching and junior and senior development role, and I feel that journey has also helped me in my capacity as a football player – it’s given me a different perspective on the game.”

The Melbourne Victory begin their W-League campaign in a blockbusting away clash against reigning champions Sydney FC at Netstrata Jubilee Stadium in Kogarah on Sunday, November 17, with kick-off at 4pm, and the game scheduled to be broadcast live on ABC TV.

Meanwhile, Maizels revealed to The AJN that she is “super keen” to be heavily involved again in the Australian team for the Maccabiah Games, which will next be held in Israel in mid-2021.

“I have actually just submitted an application to Maccabi Australia to be the head women’s football coach for Maccabiah 2021, and I’d really love to contribute, either as a coach or as goalkeeper.

“I had such an amazing experience on debut at the 2017 Games, so it would be so great to be part of that journey again.”