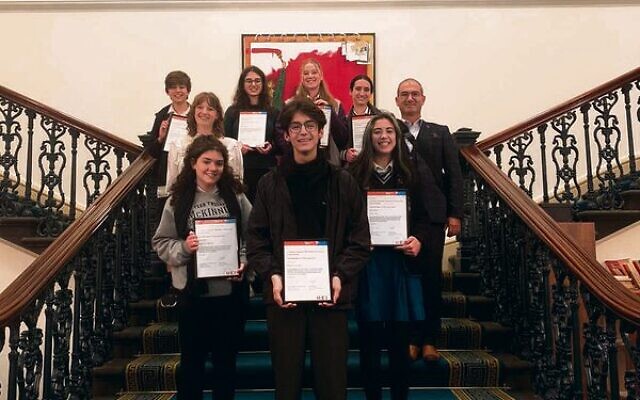 The J-Voice Committee receiving their certificates at the recent ceremony.

The United Jewish Education Board (UJEB) said it was beyond proud of the student J-Voice Committee, who recently celebrated the conclusion of the J-Voice project at Treasury Place with the Department of Education and Training Victoria.

The session commemorated two years of hard work, in addition to announcing the changes to improve the Jewish student experience in Victorian government schools.

The Department of Education approached UJEB in 2020 to facilitate a Jewish student advisory group to research the Jewish student experience in Victorian government schools and provide recommendations to Victorian Education Minister James Merlino.

In July 2021, the students presented their findings and recommendations directly to Merlino and the Department of Education, followed by a first wave of changes at the end of 2021.

The ceremony highlighted some of the outcomes, including changes to the school canteen policy to include more kosher offerings, improvements to the Attitudes Towards School Survey to include experiences of racial bullying, increased funding and resources for Holocaust education, and more effective response processes to instances of racial bullying and antisemitism in government schools.

J-Voice Committee member Alex Rozen said seeing the real change students can make was empowering. “It’s astonishing to think that our report findings and recommendations have aided in Victoria becoming the first Australian state to criminalise the public display of swastikas, as well as Holocaust education becoming compulsory in government school curriculums.”

Another committee member, Irene Pecherski, is anticipating the ongoing implementation of Holocaust education across government schools. “It was amazing to see our recommendations being actualised and making such a monumental change in not only our school, but throughout such an impactful branch of government.”

Merlino celebrated how the J-Voice project enabled students to communicate ideas and influence change that directly affects young Jewish people and their peers.

“I am so impressed with the thought and effort that has gone into this important project – from the survey design to the interviews, and the preliminary recommendations themselves,” he said.

Hannah Schauder is an AJN employee.