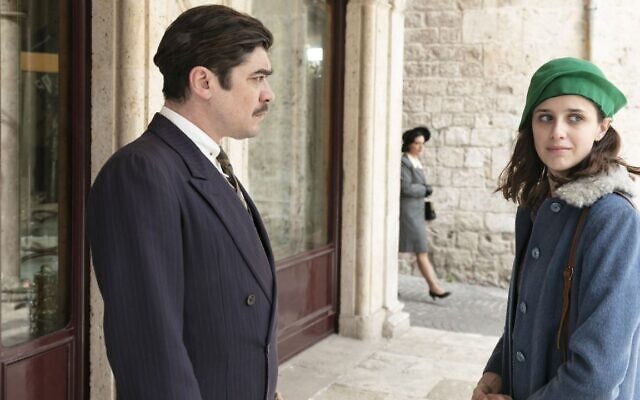 Set in the picturesque provincial town Ascoli Piceno in central Italy, The Shadow of the Day is a dramatic love story set in the late 1930s.

Luciano, a wounded World War I veteran and a sympathiser of Fascism like most Italians at the time, runs a classy restaurant overlooking the town’s ancient square. He believes he can live his life according to his own set of rules. Luciano, who was injured during the war – physically and emotionally, lives in his own bubble, observing the world through the window of his restaurant.

One day, Anna appears, looking for work. A young woman with a dangerous secret, she is hired for a job in the restaurant. Slowly, affection creeps in between the two and among the many dangers Luciano faces, there is the greatest of all: love.

The film covers the time of the May 1938 state visit of Adolf Hitler and the disastrous entry of Italy into World War II, including the radicalization of Italian fascism and the oppression of the nation’s Jews.

Importantly, throughout the film, while Luciano admires the achievements of fascism, he does attempt to shield his employees – who oppose his views and are largely considered anti-fascist – from local officials, and the fascists who come to the restaurant because they admire him for his war service. Luciano tolerates their business in a desperate attempt at security.

The Shadow of the Day is written and directed by Giuseppe Piccioni, who was born in the same location as the film’s setting, and presents a thoughtful melodrama that reflects on fascism and the pre-war atmosphere of control and isolation.

The Shadow of the Day is currently showing as part of the Italian Film Festival throughout Australia.

The festival was founded in 2000 Cav. Antonio Zeccola who, according to the website, is one of Australia’s many migrant success stories. Zeccola “built Australia’s only national boutique cinema network which now encompasses twenty-four cinemas and more than one hundred screens nationally”.

Saying that Australia had other festivals, but nothing dedicated to Italian film, the first Italian Film Festival presented eleven features, five retrospective titles and five shorts. It was a resounding success.

By the following year, on the back of the success of 2020, the Italian Film Festival had expanded nationally to Perth, Adelaide and Brisbane. Since then, the website states, “the festival has grown in popularity to become the biggest public celebration of Italian cinema outside Italy”.

For more information and session times of The Shadow of the Day, head to italianfilmfestival.com.au