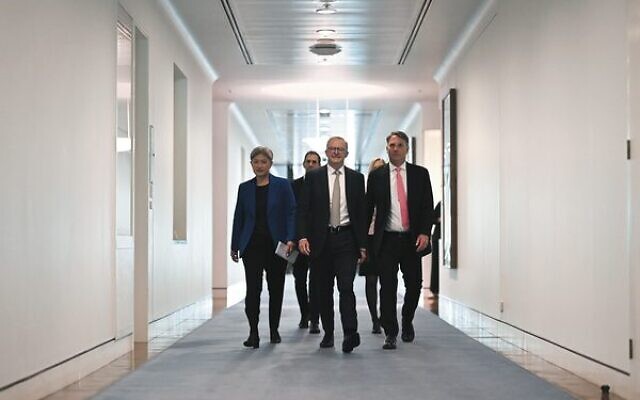 The Morrison government was generally an outstanding friend, as demonstrated, among other things by its regular statements of support for Israel, including condemnation of the BDS movement and affirmation of Israel’s right to defend itself, an excellent voting record on Israel in the UN and its agencies, and the recognition of west Jerusalem as Israel’s capital. This last decision was controversial even though it should not have been – it is almost universally accepted that Israel will retain west Jerusalem in any peace plan, and every other nation seems to have the right to choose its capital.

Scott Morrison’s term as prime minister also saw him announce his government would “embrace” the International Holocaust Remembrance Alliance (IHRA) Working Definition of Antisemitism and proscribe the entirety of Hezbollah and Hamas as terrorist organisations. There has also been much-needed and appreciated funding for the Jewish community’s unique security needs.

Encouragingly, in the lead-up to the election, the ALP stated often that an Albanese government would remain a steadfast friend of Israel, and would continue to develop trade links. In response to a congratulatory tweet from Israeli Prime Minister Naftali Bennett, Anthony Albanese thanked him and continued, “I look forward to working with you to continue the strong relationship between our two nations.”

To its credit, the ALP announced it would adopt the IHRA definition in government prior to Morrison embracing it, has also been responsive to the Jewish community’s security needs, and has regularly stated its opposition to BDS. It has also staunchly supported the principled retention of the very important Section 18C of the Racial Discrimination Act.

On the other hand, there are concerns about the ALP National Conference passing motions for the party to recognise a Palestinian state as a matter of priority, and elevate that to the party platform. Such premature, unilateral recognition would be counterproductive to the cause of peace – rewarding Palestinian intransigence and encouraging continuing misconduct, while crucially removing incentives for the Palestinians to negotiate.

Answering AIJAC’s pre-election questionnaire, the ALP stated that “this will ultimately be a matter for a future Labor government,” and that “The only way a two-state solution can be achieved is through a negotiated outcome between the two parties.” However, the government will likely come under internal pressure to implement this flawed policy, and its ability to resist these pressures will indicate where this government is heading.

Statements from the ALP regarding controversial issues about Israel have at times been more equivocal and less supportive than those from the Coalition, a trend we may see continue. So it is possible that Australia’s voting record at the UN will also be less supportive, if previous ALP governments are any guide.

While almost all Coalition MPs who speak on Israel in Parliament are supportive, and Israel also has many staunch friends among the ALP ranks, there are many Labor MPs who take highly critical positions when discussing the issue. The failure by senior ALP figures to condemn the BDS campaign against the Sydney Festival was also disappointing.

Also of concern is the improved position of the Greens, whose position towards Israel is probably best described as hostile.

The Greens will likely increase their representation in the lower house from one seat to three or four, and in the Senate from nine to 12. They also came closer than ever before to defeating Labor’s Josh Burns in the Melbourne seat of Macnamara, which has the largest Jewish population of any seat. The new Greens member for the Queensland seat of Griffith, Kevin Rudd’s old seat, will be Max Chandler-Mather, whose private Facebook page features a “Free Palestine” profile photo frame. Referring to last year’s Gaza conflict, he tweeted, “It’s hard to describe this as anything other than a genocide. The Israeli military are clearly deliberately trying to destroy Palestine as a people and a state …”

The government will either gain enough seats to form a majority in the House of Representatives, or near enough to it to comfortably get its legislation through. However, it will find it very hard to pass legislation in the Senate, if it’s opposed by the Coalition, without Greens support, but easy with Greens support. Thus, a de facto coalition of sorts between the ALP and Greens could evolve on certain key issues.

The “teal” independents, who are likely to have less influence than they hoped due to the strength of the ALP performance, will likely be a mixed bag on Israel and Jewish issues.

A sad fallout from the election is the large number of friends of the Jewish community and Israel who lost their seats. Chief among them is former treasurer Josh Frydenberg, who would otherwise have been favourite to become the first Jewish leader of a major Australian party. Jewish Senator Stirling Griff also lost his seat, leaving four Jewish MPs – Labor’s Mark Dreyfus, Josh Burns and Mike Freelander, and Liberal Julian Leeser.

Other friends lost from the House of Representatives include Liberals Dave Sharma, a former Australian ambassador to Israel and a great supporter, who often shared his keen insights on the Middle East; Tim Wilson; Ken Wyatt, the first ever Indigenous minister for Indigenous Affairs; Jason Falinski, who has a Jewish father; Ben Morton; Katie Allen; and Trent Zimmerman.

On the ALP side, Kristina Keneally, who spearheaded Labor’s support for the proscription of the entirety of Hezbollah and Hamas, will also be leaving Parliament.

Senator Eric Abetz, the chair of the Parliamentary Friends of Israel, almost certainly said more that was supportive of Israel than any other member in the last term, so evident in his speeches and his comments and questions in committees. He is almost certain to lose his seat, as are fellow supporters of Israel, Liberal Senators Zed Seselja and Amanda Stoker.

Overall, despite concerns, pro-Israel and Jewish Australians will be hoping this incoming government and Parliament will remain friendly, and any problematic changes will be a matter of degree, not direction. And there are still many friends on both sides of the aisle.