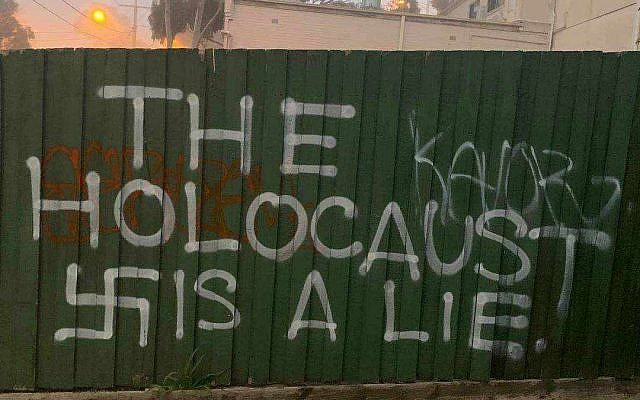 Antisemitic graffiti in the Melbourne suburb of Chadstone.

LATEST figures reveal that the number of antisemitic incidents in Australia has not seen a significant increase in the past year; however, the nature of the incidents has become more serious, according to the Executive Council of Australian Jewry (ECAJ).

The communal roof body’s annual antisemitism report, released on Sunday, notes that the total number of attacks in the last 12 months was 368, only two more than the previous 12 months.

“The overall number of antisemitic incidents continued at, and slightly exceeded, the unusually high number logged during 2018, which saw a 59 per cent increase over the previous year,” ECAJ’s research director on antisemitism Julie Nathan said. “In 2019, there was also a marked increase in the seriousness of the incidents recorded.

The report notes that there is often a correlation between a rise in antisemitic commentary and incidents in Australia and when issues involving Jews, Israel or conflicts in the Middle East receive prominent coverage in the mainstream media.

It also states that antisemitism has a serious psychological impact on the lives of Jewish Australians.

“There is an established body of research that highlights the serious health effects exposure to racism can have on individuals, similar to other stress-induced disorders,” the report states.

“Repeated exposure to it contributes to conditions such as hypertension, nightmares, post-traumatic stress disorder, and, in extreme cases, psychosis and suicide.”

The report included details of several concerning incidents across the last year.

In October 2018, a Jewish teenager on a bus was told, “It’s a shame that Hitler didn’t kill all the Jews.”

Two months later, the Holocaust was used as an example of “efficient and effective management” of people in a lecture at the University of Technology Sydney’s business school. In the same month, a man placed two hoax explosive devices at the back door of a shule.

Meanwhile, Jewish leaders expressed their disappointment last weekend after it was reported that a group of shoppers was seen entering a Coles store in the Victorian town of Woodend last month wearing Nazi uniforms.

When challenged, they reportedly said it was “only a joke”.

ECAJ co-CEO Peter Wertheim said it was “truly bizarre” that some people are “so ignorant of history, or so oblivious to the gruesome butchery of the Nazi genocide, that they apparently think that walking around in SS uniforms with swastika armbands is just a bit of harmless fun”.

“Perhaps a visit to the Auschwitz extermination camp or the crematorium at Theresienstadt would jolt them back into reality.”