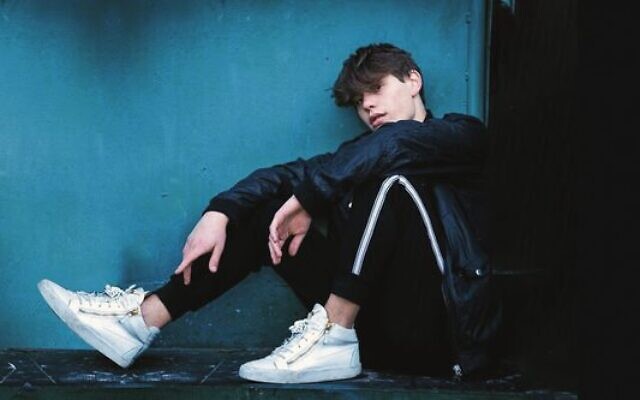 Laivy Miller, 16, is excited to kick off his music career. In addition to his father, he said his influences include Justin Bieber, Drake and Ishay Ribo. Photo: Laivy Miller

Most 16-year-olds are thrilled to start driving a car or go on a first date.

But Brooklyn-born musician Laivy Miller, 16, has set his sights higher, and he’s already establishing a career in music.

Of course, it helps that Miller is the son of Matisyahu, the popular Jewish musician who first made a name for himself in the early 2000s as a Chassidic reggae act.

But the familial connection means the expectations the teen faces are sky-high.

Still, following a parent’s footsteps can be a challenge – for both generations. How does a famous father encourage a son who wants to go into the family business, without making him feel pressured?

“With Laivy, I was always very subtle with it – but it’s been a part of who he is, so it was just a matter of time,” Matisyahu told The New York Jewish Week.

“He played me something and I was like, ‘Wow!’ He’s always had a strong voice. But I noticed a certain tone to his voice.”

The teenager – who goes professionally by the single name Laivy – released his first single last week, Beauty and The Beast. The song is about his first experience with romance and feeling he was too young to be in a relationship.

Miller said his family has been supportive of his fledgling music career. He said his mother taught him to “always stay true to yourself and remember where you came from even when people push you down”.

Similarly, he said the greatest lesson he learned from his father is to “never let anyone trying to put you down affect your passion or your growth”.

Matisyahu became a follower of the Chabad-Lubavitch Chassidic movement, and performed his reggae-inspired songs in the full beard and black garb of a Charedi Orthodox Jew.

He eventually left Chassidism and when he had his beard shaved off, it was covered by MTV and Rolling Stone. Some fans felt betrayed by his religious about-face; others opined that artists should be judged by their music, not their clothes or religious choices.

As for Miller, he said that people may have their own definitions of what it means to be religious, and that everyone has their own journey.

In this first-ever interview with the press, Miller conceded it is natural that people will compare him with his father. He said he also knows that there may be criticism, but he knows that is part of the business.