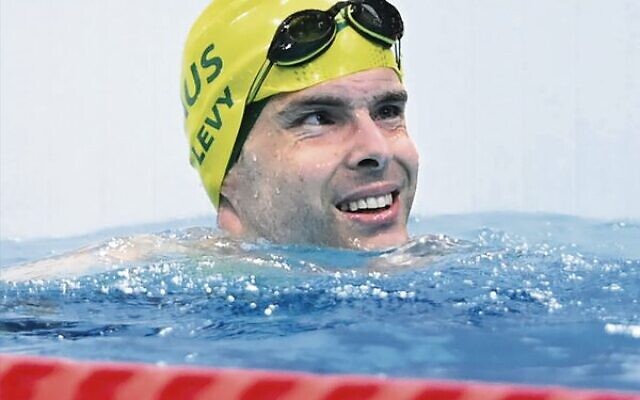 LIKE a fine wine, 34-year-old Matthew Levy keeps getting better with time, and with every Paralympic Games. The hardworking North Sydney-based swimmer – who lives with cerebral palsy and vision impairment – is the oldest member of Australia’s Para swimming team, but you wouldn’t know it based on his race times, his energy or his enthusiasm.

At his fifth Paralympics in Tokyo earlier this week, Levy not only added gold and bronze medals to his substantial collection, but helped smash a freestyle relay world record by almost two seconds.

These latest achievements pushed his Paralympics career medal haul up to nine medals, including three golds.

Levy looked sharp in the first of his three events on August 28, setting a new Australian record time of 1:21.10 to earn bronze in the men’s SB6 class 100m breaststroke final. 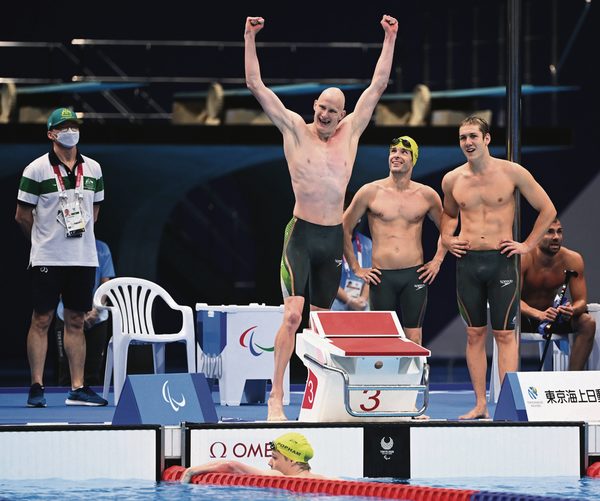 Rowan Crothers, Matt Levy (centre) and Will Martin are all smiles as their teammate Ben Popham finishes the relay in first place to seal gold for Australia on Monday night. Photo: Delly Carr

After a fast opening lap, he was right alongside reigning Paralympic and world champion Yevhennii Bohodaiko from Ukraine, and Colombian Nelson Corzo Crispen, with 15m to go.

He maintained his pace, but Bohodaiko streaked ahead of him, and Crispen, in the last few strokes.

Thrilled by his time, Levy celebrated by punching the water, and moments later told Channel 7 in a poolside interview, “It’s pretty cool – you come here to do your best, so it was great to come away with a medal on my first night … and even more great a PB!”

The Aussies chose to start with Crothers, their fastest swimmer, establishing a substantial early lead.

Swimming in the third leg, Levy swam his fastest 100m freestyle time of the year (1:01.30) to protect that lead, and Popham was able to just hang on against Italy’s best swimmer to seal the win, prompting hugs and fist pumps all round.

Levy described their achievement as “amazing, and great to do as part of a team”.

“I’ve always loved the sport of swimming and the Paralympic community, and it’s really about having a passion and a belief in yourself.

“In my last four Games, and especially in these Games, I’ve continued to have that.”

Levy thanked his family, friends, coaches, and the Australian Institute of Sport for their support, and said it feels, “amazing to represent my country”.

“That’s why I continue to compete, and strive for the highest level.”

Levy completed his Tokyo campaign on Tuesday night, coming fifth and posting a PB in the final of the men’s S7 50m freestyle.