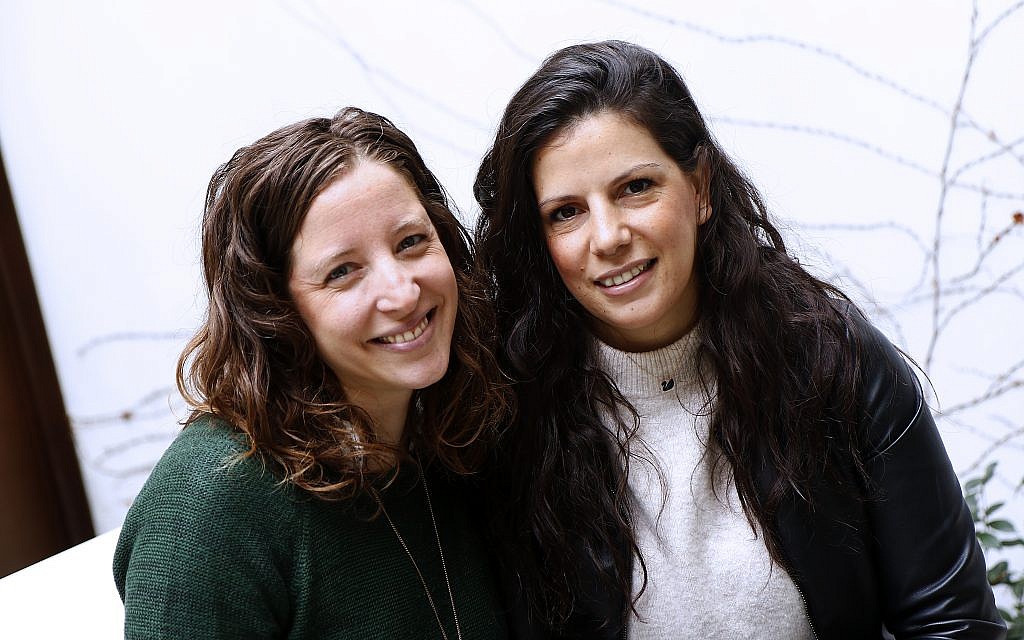 WHEN Shada Edress Mansour reflects on her childhood memories, she speaks with a warmth that mirrors the October days she and her family would visit the olive grove. There, they would pluck the plump purple fruits from the tree before sitting in the shade of its swaying boughs. They shared breakfast as a family, together with the other families from Taybe, an Arab city in central Israel.

“It was a very warm and happy childhood,” recalls Shada, now 32.

“In my culture, your connection is not only to your immediate family – but your uncles, aunts and cousins. We meet once or twice a week and have dinners together, about 60 of us. 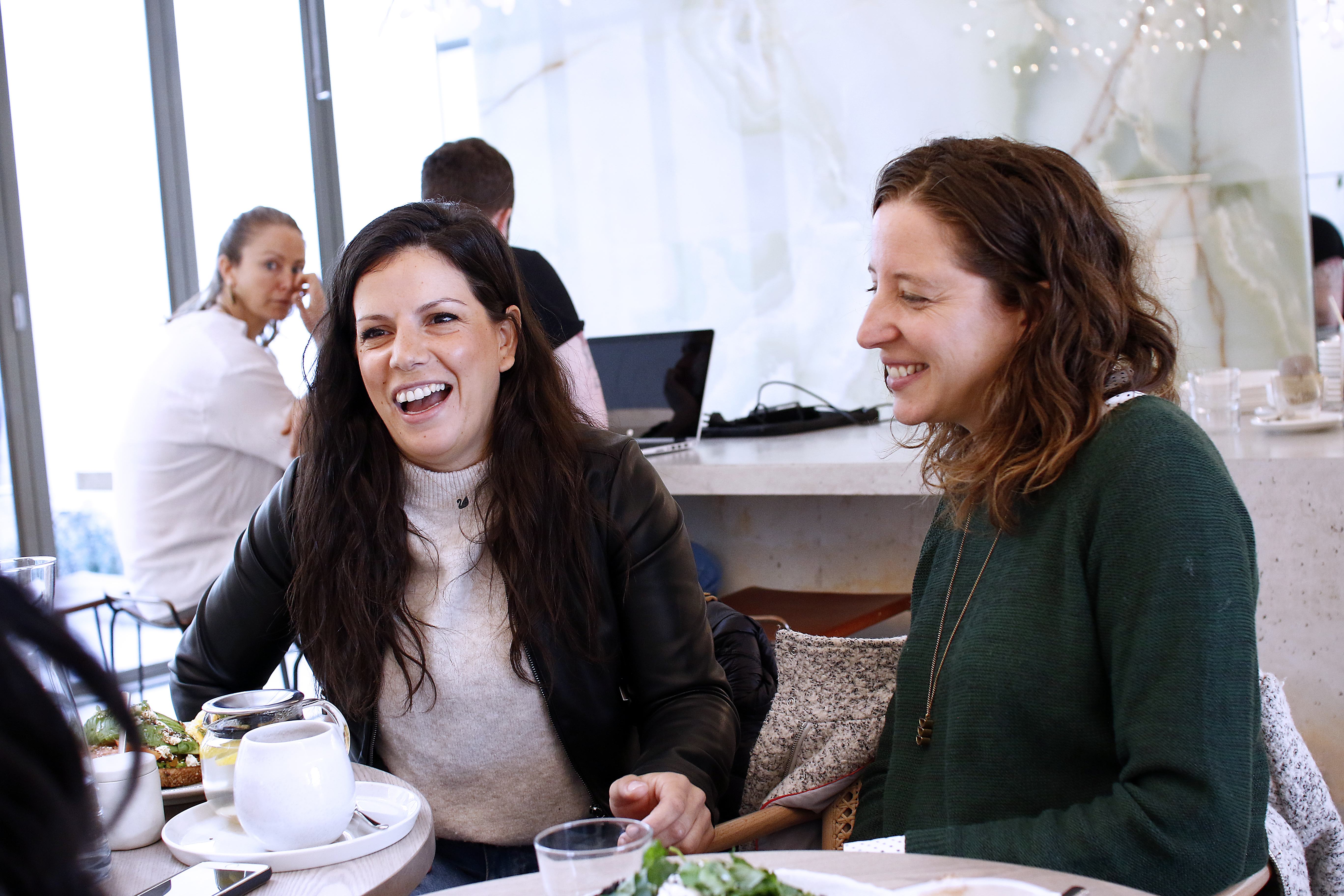 “It was very special, always having a lot of people and a lot of friends around me,” she smiles.

But when Shada entered the world beyond Taybe, her confidence morphed into meekness.

“I remember not thinking about my identity as an Arab when in my zone and in my town, and feeling very comfortable in this identity. But in the moment I leave my town, and enter with the different people, I immediately go into this other personality, which I didn’t like.

“Most of my life, I didn’t know anyone else who was different from me, and living like that, as a minority is a lot of feeling of shame.”

IN another childhood far away, Noa Yammer was captivated by the big map of Israel that hung at the front of her classroom in Teaneck, New Jersey. There was a clock too, set to Israel time, and each day, Noa and her classmates would check the news to see what was happening there. The modern-Orthodox community has a strong Zionist identity, and when Noa was eight years old, her family decided to move to Israel for the year. Then, when she was in high school, her older brother joined the Israeli army. During his service, the Second Intifada broke out.

“Israel was this place that felt like home. But there was also this feeling that we were under threat always, and like I have an enemy there.” 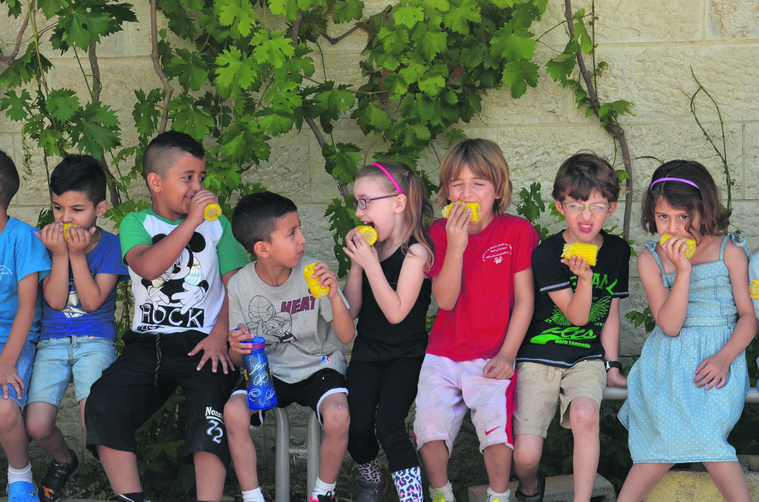 A playground snack at Hand in Hand Jerusalem.

Despite the threat, at the age of 18, she went back to Israel for her gap year.

“I felt like I belonged. I thought this is the place where I can most fully be Jewish in a way that I wanted to be.”

And the threat became reality very quickly for Noa. Within her first week of being back in Israel, she found herself at the funeral of her friend’s father who had been killed in a terrorist attack.

“I’m sitting there, sitting next to her at shiva for her father, and I’m thinking, what is this? Yet somehow, even with that, I felt really committed. I felt that this is the place that I wanted to be. There is a sense of purpose, a sense of belonging.”

Noa made aliyah the following year. 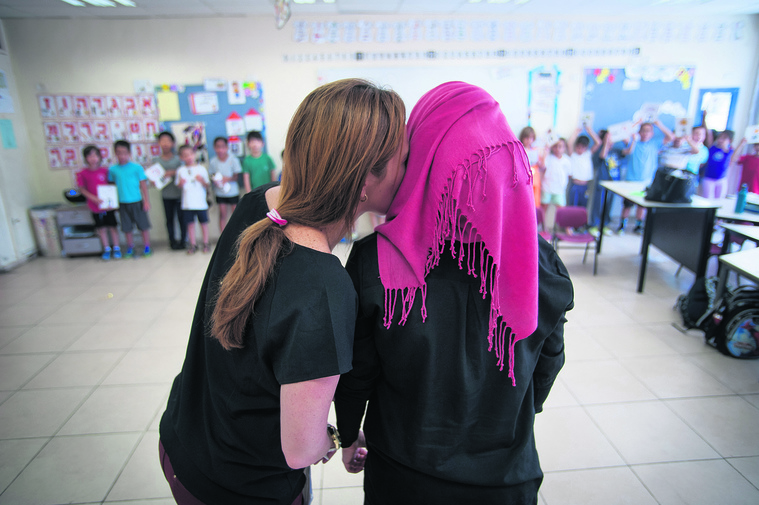 SHADA was about 11 years old when she had her first encounter with Israeli Jews. She visited a shopping mall with her mother, and noticed she became “very uncomfortable, very nervous, and made herself smaller”.

“Everybody would just stare at us, at my mother’s hijab. As a child, it was a very bad feeling. This is my experience as a child; feeling shame and afraid,” Shada remembers, also recalling the stutter she developed while trying to order a cup of tea at the mall.

“I really felt the Jewish Israelis, they don’t want me there.”

On another trip to the shopping mall, while Shada’s family’s car was being checked by security, a loud, wailing siren penetrated the air.

“I thought that all the army is coming to get us at that moment. I remember me and my sister holding hands at that time, feeling very confused, not understanding what was going on. Why treat us like that? What’s going on? We just wanted to do some shopping at the mall.”

Unbeknownst to Shada, the siren was a call for remembrance. It was Yom Hazikaron. 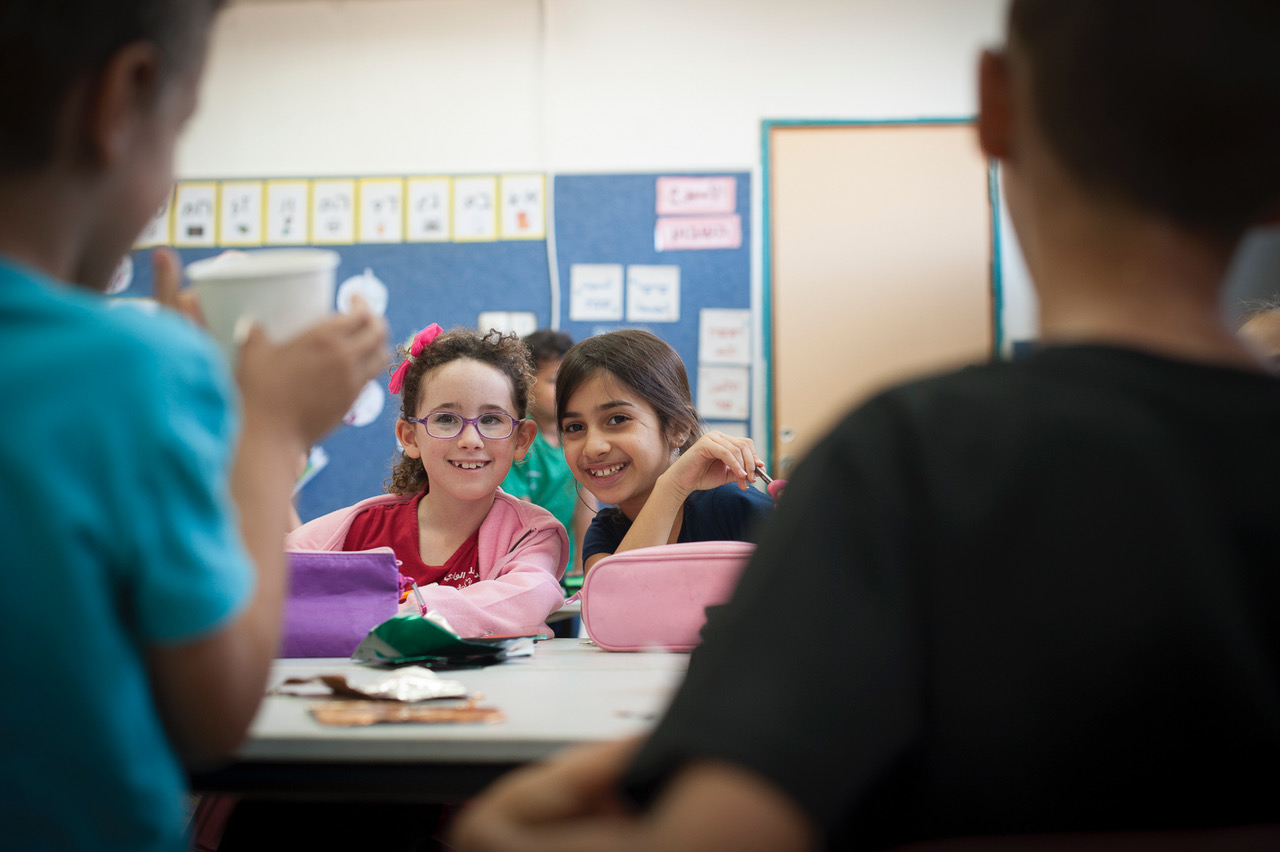 Inside the classroom at Hand in Hand Wadi Ara. Photo: Craig Stennett

FEAR had also been a feeling that Noa understood, and it largely kept her within the realm of Jewish Jerusalem for her first six years as an Israeli.

Then Noa was invited to join a special music project where Israelis and Palestinians both participated.

A musician herself, she agreed to be a part of it – “very hesitantly, but with some curiosity”.

Week after week, Noa attended the group, and she discovered that the participants shared more than music – they also shared stories.

Noa connected with Siwar, another young girl from Jerusalem. With a music event upcoming, the two women took to the street to hand out flyers. It was an experience that changed Noa’s perspective.

Siwar saw a group of Israeli soldiers on the street and froze in her steps before grabbing Noa’s arm and pulling her in the opposite direction.

“I was like, what are you doing? I was so confused and thought what could you be scared of?” she tells. 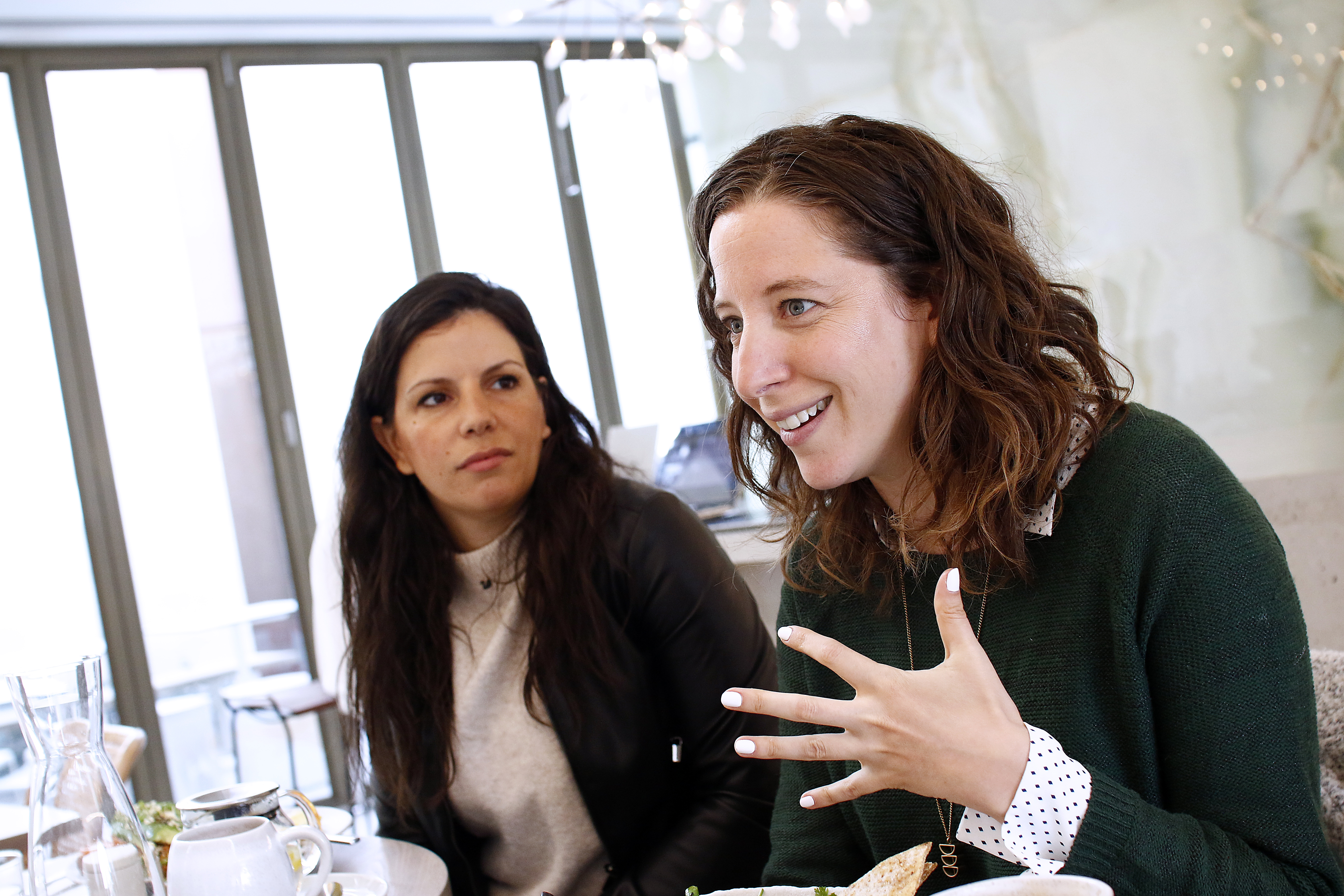 “There was a choice for me to ask her, what happened in your life that makes you afraid? The choice to listen, to hear the stories and to feel the pain of listening; that challenge feels really threatening.”

Siwar told Noa that her brother had once been arrested in the middle of the night by soldiers, and that her grandmother had died after inhaling tear gas.

“I was left with, what do I do with this? There is a part of me that wants to say, ‘oh, she is making it up’, or ‘it’s not real’, and it feels really threatening,” explains Noa.

A few weeks later, Noa shared with Siwar the stories of her brother, and her friend’s father who was killed in the terrorist attack.

“She could hear me too, and I saw that was allowed.

“That was a surprising moment also of oh, maybe there is room for both of us? Maybe I can hear her, and she can hear me.” 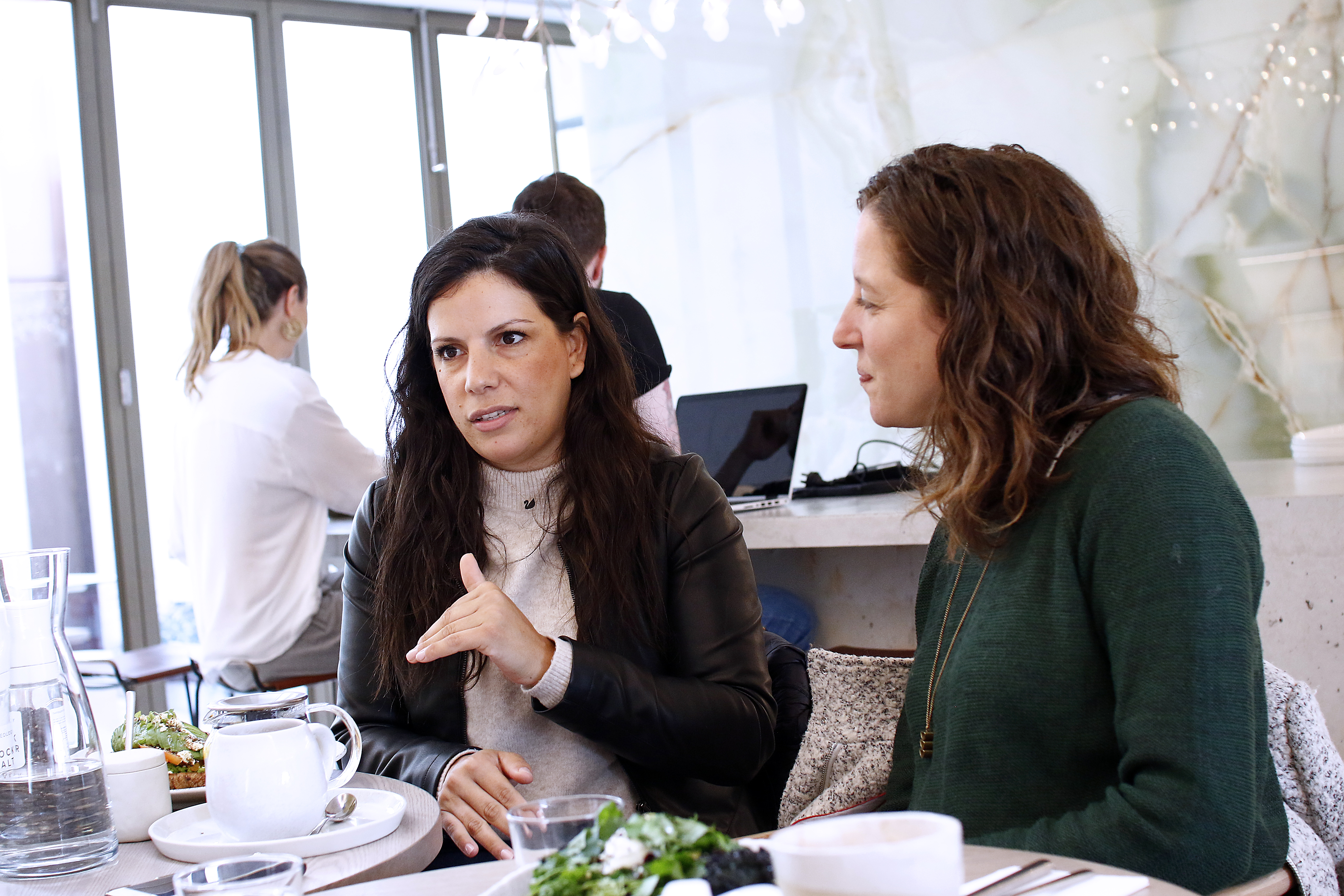 AT 18 years old, Shada moved to Jerusalem for her university studies, and relates that in the four years that she lived there, she never even had a coffee with someone that was Jewish.

“I wanted to keep the separation … I remember not wanting to be in a relationship or a friendship with someone Jewish.”

But at 26 years old, she had a daughter – and motherhood made an unexpected and drastic impact on her outlook.

“I remember the dilemma I had, but I guess, I didn’t want my daughter to see me like I saw my mother; making myself smaller and uncomfortable. I couldn’t do that. I just couldn’t do that to her, that she sees me in that situation.

“I also wanted for her a good education because the schools in my town and the Arab schools are not that good in education and developing a personality in a child”.

And that was what led Shada to discover Hand in Hand.

Hand in Hand is a network of bilingual and integrated schools and communities for Arab and Jewish children throughout Israel. It was established to combat the growing social alienation and lack of trust between Jewish and Arab citizens of Israel, with students learning Hebrew and Arabic, aiming to build inclusion and equality.

Shada made the decision to enrol her daughter, Nay, despite the suspicions of her family.

“In our school community there is an equal place between the Jewish and the Arabs, and they couldn’t understand this difference, because we are not used to this relationship.”

The relationship between both groups stretches beyond the school yard, with community events and personal gatherings.

Shada recalls the first time she, her husband and Nay were invited by Aviv, the Jewish mother of one of Nay’s classmates to celebrate Succot in their home. They brought a plate of the flaky Arab delicacy baklava, and joined the family in the succah.

“I didn’t know how you act, what to do, what to say? The games, the food, the music was different. Everything. I remember I was very stressed.”

Now, Shada counts Aviv as one of her friends.

“All of the mothers in our community are very involved. We connect in woman things – being a mother, leading our community and our daughters’ and sons’ education.

“I think we met in the things that we believed in, and also in the normal everyday things.”

Three years since Nay began at Hand in Hand, Shada’s family are more convinced when they see “how open and confident she is, and how many things she knows about other groups, about Jewish people”.

When she visits the mall with her cousins, she happily translates for them, while loudly and proudly speaking Arabic.

“Every time I see how she plays and how she interacts with her surroundings, especially in Jewish places, I feel not jealous but proud, because I think about myself when I was her age and compare us. I am very happy for her because she can enjoy,” shares Shada.

“She is six years old and very powerful.”

After seeing first-hand the positive impact of Hand in Hand, Shada is now a community organiser at their Kfar Saba school.

“Being a part of the Hand in Hand community, I can say that I believe this is the right way to live in Israel.

“I can’t see how it is normal to not live this way.

“We together, can have a real impact, and make a real change on our society. We need each other – because in the end, we fight also for normal rights too – like the cost of living, housing, or social issues that don’t discriminate.

It was through Shada’s involvement at Hand in Hand that she met Noa, the school’s international communications director – and her good friend.

“As a Jewish person in Jerusalem, it gives me an anchor, and the strength to say, actually we can build something here,” says Noa.

“We’re not waiting for someone from on top to say, oh there is peace now, we’ll live together. No. We’re just creating the world we want to live in.

“If that world doesn’t exist around us, then we’re going to make it, and we are.”

For more information about Hand in Hand, visit handinhandk12.org or for New Israel Fund, visit nif.org.au.