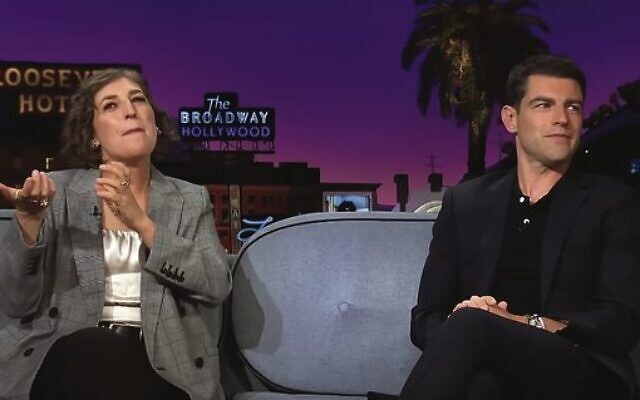 After wishing the two “Shana tovah” at the start of the show, Corden asked Bialik, who is known widely as an observant Jew, what she did to celebrate the Jewish new year.

Bialik first spoke about attending outdoor services on both days of the holiday to avoid having to wear a mask indoors. When Corden then asked about the “quite a major role” that she plays in the service, Bialik told him that she blows the shofar.

Greenfield, who was born and raised in the New York town of Dobbs Ferry and had a Saturday Night Live-themed bar mitzvah, then said, “Tekiah!”

Bialik and Greenfield then demonstrated the calls and sounds of the shofar, with the former holding her hands up to show how the ram’s horn is held and the latter calling out tekiah, teruah and shevarim.

“It’s the most exciting part of the Jewish culture,” said Greenfield. “This will be my dad’s favourite thing I’ve ever done.”

Bialik told Corden about her Yemenite ram’s horn, gifted to her by her grandmother and resting on top of her piano for most of the year. “We’re a very colourful people,” quipped Bialik.

While the British Corden acknowledged his absolute lack of knowledge about Rosh Hashanah and ram’s horns, he showed he knows a little about Jewish culture.

“I’m kvelling at the thought of it,” he said.