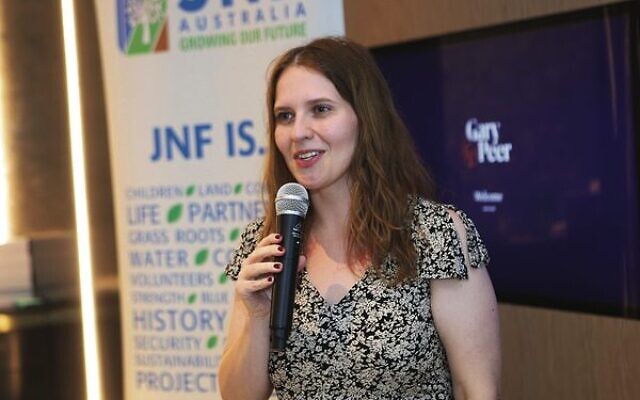 “In a role that is entirely devoted to supporting the needs of the Jewish community, Cassie has thrown herself into this to go above and beyond,” outgoing Jewish Care Victoria CEO Bill Appleby said.

Humbled doesn’t even begin to cover it.Last night I was overwhelmed to receive the inaugural Joshua Levi Young…

She receives a prize of $5000 thanks to the Levi family, and intends to use the scholarship to undertake facilitator training for Older Person’s Mental Health First Aid to build the capacity of staff who support elderly people in the community.

Congratulating the nominees, Ben Levi – whose late brother was CEO of The AJN until he tragically passed away last year aged 36 – said, “Josh was all about community, honesty and making our community a better and safer environment.

“We had so many nominees this year, our community is in such an unbelievable position to have these great young people who are working to make our community a better place.”

“Our community should be extremely proud of the incredible youth and young adults that show such passion across a variety of causes,” JNF’s Etty Ayalon told The AJN.

B’nai B’rith stalwart Ernie Friedlander added, “When I instigated these awards 10 years ago I was hoping it would fill a need and a gap in our community. By first getting the JNF and for the last two years The AJN involved, our vision was fulfilled. It is now a major community event.”

AJN CEO David Redman commented, “Once again, The AJN is proud to be part of the Changemaker Awards and to acknowledge the amazing work younger members of the community are doing.

“We hope the awards continue to grow and to inspire and encourage others to do what they can to make change in the world.”

To read about all the winners and nominees, visit australianjewishnews.com/changemakers.