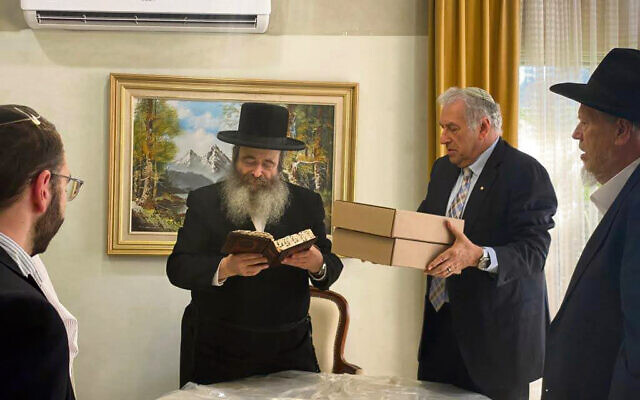 An eruv makes a significant contribution towards enhancement of the quality of life on Shabbat, especially for young families otherwise unable to leave their premises as a family unit on Shabbat. It is similarly important to the elderly and others dependent on wheelchairs, walking sticks and frames. A feature of Jewish life in many prewar European cities and long taken for granted throughout Israel, an eruv is now an accepted feature of metropolitan Jewish communities worldwide. Many potential home purchasers and renters include a check on a property’s position relative to the eruv as a key factor in their decision-making

The least obtrusive and most economical halachically acceptable method of enclosing an area uses a series of “tzurat hapetach”. Literally this means “the form of a doorway” – two vertical poles with a horizontal wire over the top.

The rationale for this solution is that a doorframe is a halachically valid form of enclosure. The proliferation of poles and wires in metropolitan areas has made this method especially prevalent and expedient. However, one cannot assume that any such arrangement of utility company wires – albeit that it is continuous – is automatically halachically valid. There are many technical details requiring compliance; hence the need for additional dedicated construction work, as well as close and ongoing monitoring and supervision. Potential impact on the eruv of decommissioning of infrastructure made redundant by the NBN is also a matter of future concern.

The history of Melbourne Eruv goes back to its predecessor eruv, arranged in 1988 by former Mizrachi Rabbi Baruch Zaichyk, despite strong rabbinic opposition across the Melbourne community. Following his departure from Melbourne, to achieve broad communal support, it was decided in 1995 that an eruv would be constructed by Mizrachi and the Council of Orthodox Synagogues of Victoria (COSV) working in conjunction, through a new entity, Melbourne Eruv Pty Ltd. Capital funding was initially provided by the COSV and Mizrachi, and there were even contributions by the utility companies involved.

To ensure the highest level of halachic compliance, the services of an international expert, the late Rabbi Shimon Eider, were enlisted in regard to all halachic aspects. He visited Melbourne at the commencement of the project to determine feasibility and lay down construction guidelines, and made subsequent visits. Locally, Rabbi Feitel Levin acted as consultant, supervising the construction work and liaising with Rabbi Eider. Administrative and technical support was provided by the late Dr Peter Kloot. Then executive director of Mizrachi, he was key to operation of the eruv until shortly before his sad and untimely demise. This writer supervised the actual construction and then weekly checking of its continuing validity.

Local supervision became the responsibility of the rabbinic leadership of Mizrachi and the Adass Israel Congregation. (The latter joined those taking responsibility for the eruv by funding one of the pairs of mashgichim who check the eruv on a weekly basis.) Together with Rabbi Yonason Johnson, Rabbi Shlomo Kohn of the Adass was deeply personally involved in the recent northward extension to include Malvern Chabad, Cabrini Malvern and The Avenue Hospital. Members of Kollel Beth HaTalmud also assisted with hashgacha. Melbourne Eruv is a unique enterprise that brings together all elements of the Orthodox community – aside from its funding by most Orthodox congregations through the COSV. Operative continuity dating back to before its construction is provided by veteran board member and mashgiach, Jeff Herz.

Kloot was succeeded as general manager of Melbourne Eruv by David Prins. Rabbi Eider was succeeded as senior rav hamachshir (certifying rabbi) by internationally recognised posek (halachic decisor) Rabbi Gavriel Zinner, currently represented in Melbourne by Rabbi Johnson. Ongoing funding of operation and maintenance of Melbourne Eruv is derived from the COSV levy collected by congregations from their membership. That some beneficiaries do not contribute to costs appropriately or at all is a serious communal problem, placing an unfair burden on those who do contribute, and one must question the morality of those who benefit from the eruv’s existence without contributing their fair share to the costs.

Given the potential for damage to the infrastructure particularly through vehicle collisions or inclement weather, as well as the effects of electricity pole replacements and other infrastructure changes, that the eruv is operative in any given week cannot be taken for granted. A smartphone app is available for download from the Apple and Android app stores, to provide up-to-date information as to the status of the eruv, as well as details of the area covered.

While to most people the eruv is the boundary of poles and wires that encloses the area where carrying is permitted, the “making of an eruv” is an annual ceremony similar to the making of the more familiar eruv tavshilin that permits cooking on yom tov for Shabbat. Just prior to Pesach each year, the rabbis of Mizrachi and Adass Israel come together for the ceremony, making a brachah on behalf of the community, utilising two packages of matzot that serve as the food that unites us all. Those matzot are then placed in a secure prominent place in the foyer of the Mizrachi Shule.

With the outwards movement of the Jewish community since completion of the eruv, its coverage was extended to include portions of Bentleigh and Moorabbin, and most recently Malvern and neighbouring suburbs. There is interest from communities and individuals for new eruvin to encompass yet more suburbs. Any further extension is dependent on funding, for which the proponents must take responsibility.

May we all experience enhanced Oneg Shabbat – enjoyment of Shabbat – as a result of this unique initiative that has brought together so many segments of our community.

Yossi Aron OAM is The AJN’s religious affairs editor. For two decades he served as senior mashgiach of Melbourne Eruv, and is currently on its board.