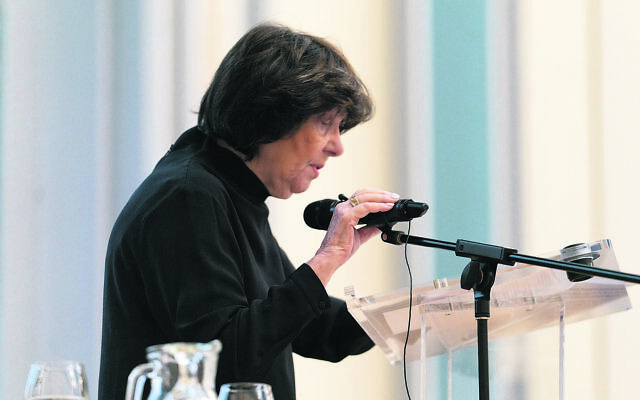 FACING her audience of community leaders, descendants of victims and survivors of the Shoah and other genocides, friends of the community and consular representatives, Eva Slonim recounted her memories of the final days of Auschwitz.

Her chilling testimony followed the screening of a stark film clip in which survivor and writer Primo Levi described January 27, 1945, and the arrival of four stunned Soviet advance troops on horseback, the first outsiders to see the carnage.

Addressing “Liberation of Auschwitz: 75 Years On”, last Sunday’s commemoration co-hosted by the Jewish Community Council of Victoria and the Jewish Holocaust Centre (JHC) at Malvern Town Hall, Slonim spoke of her ordeal. A child survivor at the Birkenau death camp, she and her sister Marta were sent there after being betrayed at a safe house in Czechoslovakia.

She described her attempts to be selected to leave the camp in January 1945, unaware it would be a brutal death march. “Despite their imminent defeat, [the Nazis’] foremost priority was that not a single man, woman or child should live to liberation,” she said.

At first, Slonim, who was gravely ill, was ordered to remain behind. Locked in a barracks, she saw flames engulf a hospital torched by fleeing SS guards. But a snowfall extinguished the fire. “The snowflakes were the neshomot [souls of the victims] descended from heaven to save us.”

However, SS guards returned and she was forced on a march from Birkenau to Auschwitz. Slonim, who was famously photographed behind barbed wire the day Auschwitz was liberated (as seen on this week’s cover), paid tribute to descendants for “fulfilling and perpetuating the dying wish of men and women and children who with their last breath whispered ‘Tell the world'”.

Introduced by JHC co-president Sue Hampel, musician Matan Franco, who was on March of the Living, performed Human Tissue, a song mourning the victims.

Military surgeon Professor Jeffrey Rosenfeld – an eyewitness to the aftermath of the 1994 Rwandan genocide – spoke of the scapegoating and betrayals that characterised Rwanda, as they had the Shoah.

He urged the community never to forget, to educate youth, to call out racism and antisemitism and deter their spread. He recalled Primo Levi’s haunting words, “Auschwitz is outside of us but it is all around us.”