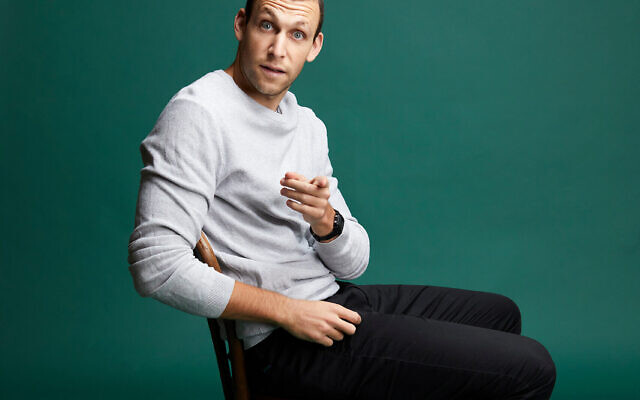 Michael Shafar, a testicular cancer survivor, is in Sydney next week to raise funds for Movember and men’s health because, according to the comedian, “laughter is the best medicine (though chemo is pretty helpful too)”.

How do we fix the housing crisis? How do we get everyone vaccinated? How do we you fold a fitted bed sheet? Shafar promises to offer pragmatic solutions to all these problems and more “except for the question about the bed sheet as that would require some sort of dark magic that most humans do not possess, so in the meantime just roll it up, throw it in a drawer and try to move on with your life,” he said.

Shafar, who studied law but left the profession for comedy, has appeared on Channel 10’s The Project and Studio 10, ABC’s Comedy Bites, triple j’s Good Az Friday and pretty much every radio and TV network. He is very quickly becoming one of the fastest rising stars in Australian comedy, performing internationally (before COVID wrecked those plans) and selling out shows across the country.

While he’ll be focusing on the world’s problems in Sydney at the Factory Theatre in Marrickville on November 25 and 26, in Melbourne, he’ll be giving 110% all over again for those who missed his sold-out show during the Melbourne Comedy Festival.

110% is Shafar’s darkest and funniest show yet. According to Shafar, 2020 was a pretty bad year for everyone, but he probably had it worse than most, having to face death for the second time when he had a testicular cancer relapse. The relapse forced him to undergo high-dose chemotherapy during Melbourne’s second lockdown. In his true comical fashion, Shafar uses the phrase, ‘worse than most’ because “some people had to home-school their kids, which is objectively worse than dealing with cancer,” he said.

By the time the Melbourne Comedy Festival rolled around, Shafar was thankfully in remission. The show received critical acclaim for his cutting observations about the dangers of cancel culture, the hypocrisy of racists and, most importantly, the unknown perils of skinny jeans.As part of Comedy Republic’s Replay Festival, Shafar has been handpicked to perform 110% once again for one night only on December 9.

As a a proud Movember ambassador this year, all the profits from his Sydney shows will be donated to the Movember Foundation.

For tickets to both Sydney and Melbourne, visit michaelshafar.com/shows