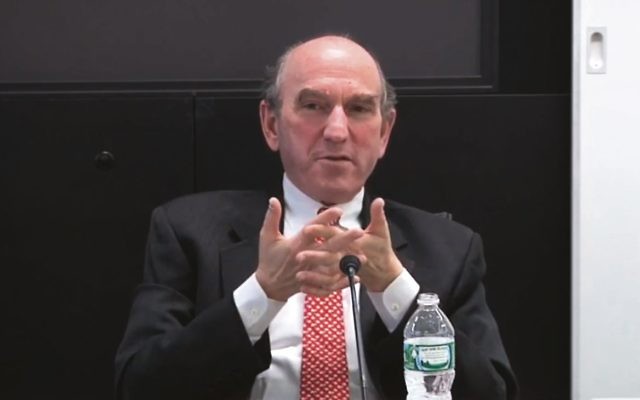 ISRAEL’S relations with several of its Arab neighbours have never been ­better.

That is the view of former senior adviser to George W Bush Elliott Abrams, who was in Australia last week as a guest of the Australia/Israel & Jewish Affairs Council.

Speaking to journalists in Sydney, Abrams, a senior fellow for Middle Eastern Studies at the Council on Foreign Relations in Washington, DC, said, “Not everything in the Middle East is terrible.

“There are large areas of the Middle East that are in pretty decent shape,” Abrams said, noting that like Israel, Egypt, Jordan and the Gulf Arabs “see the world largely in the same way, [as having] three great problems”.

According to Abrams, those problems are Iran, jihadists and the Americans.

“They don’t wonder about current foreign policy, which they dislike. Their question is whether they have an Obama problem or an America problem, and what would the foreign policy be under the next president,” he explained.

Abrams also said he is very much in favour of expanding attacks against ISIS to Syria, “because you can’t allow Syria to be a safe house”.

“They have obliterated the border between Iraq and Syria, so it makes no sense to say if they go west 10 feet they are immune from attack,” he said.

He said as long as Assad is there “dropping his chlorine-laced barrel bombs on the populace, you will not be able to defeat ISIS”.

“Obviously this means a lot of thinking about a replacement regime in Syria so it doesn’t become a Libya or Iraq,” Abrams said.

Describing the Iran nuclear deal as a “very bad deal”, he said, “it substantially strengthens the Iranian regime which is, for all of us, an enemy regime, a hostile regime, the world’s leading sponsor of terrorism. [The deal] gives it $100 billion, and the profits it’s going to get from trade and investment, and does nothing for the people of Iran who loathe the regime.

“What we have done is taken an outlawed nuclear program, which the entire world has sanctioned through the UN Security Council, and legitimised it.

“In 10 years they will have a massive and legitimate nuclear program, which is not only a threat in itself, but destroys the nuclear non-proliferation regime that we’ve had essentially since WWII.”

During his trip, Abrams also spoke in Melbourne and Canberra.