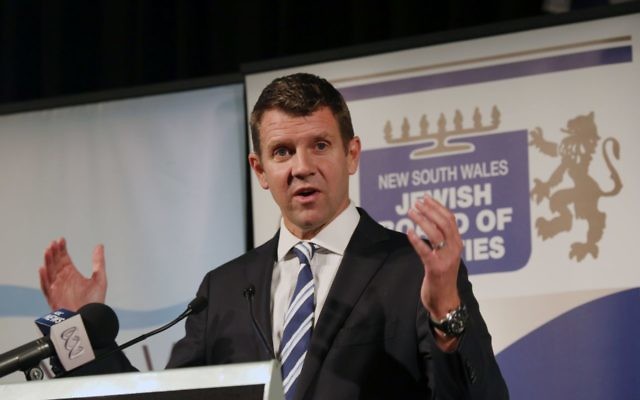 MIKE Baird intends to celebrate Yom Ha’atzmaut in Jerusalem next year, a trip which will see him become the first NSW Premier in living memory to visit Israel.

Baird made the announcement that he would lead a trade delegation to the Jewish State at a cocktail function to celebrate Israel’s 67th year of independence at the Four Seasons Hotel last Thursday night, at which he was the guest of ­honour.

“There are many things that we can work together [towards]: the amazing research and development, the innovation, the technology advancement that we’ve seen. There are so many things we can learn [from Israel].”

“We should all be very proud of the work that Jeremy has done in his short time as a leader,” Baird said, adding that the relationship between the state government and JBOD is “very important and close”.

“When you celebrate milestones, you do it with friends, and I can honestly say I consider myself a strong friend of the Jewish community,” he said.

Stating that “we stand for peace”, the Premier added that he is determined to stand with the community against the violence that it sees and endures on a regular basis.

“It is not acceptable, and we will always be there with you,” he said.

Speaking to The AJN at the reception, Ben-Shmuel welcomed the news of Baird’s upcoming visit to the Holy Land.

“I’m looking forward to this visit,” he said. “It’s very important for us, [it’s] another indication of the friendship of NSW and the Premier himself to Israel.”

Spinak said the event was “one of our community’s largest ever”, and demonstrated that support for Israel and the Jewish community is “growing across a broad range of sectors”.

“The 600 guests included almost a quarter of the Parliament, 40 ethnic leaders, 36 diplomats, 80 NGO representatives and a range of leaders from the media, police and the arts,” Spinak said. “That friendship and support, including from both the Premier and Opposition Leader, is extremely gratifying and greatly appreciated.”

He added: “We are excited by Premier Baird’s announcement that he intends to be the first-ever sitting Premier to visit Israel. The visit highlights the Premier’s friendship with the NSW Jewish community and Israel, and will be an excellent opportunity to strengthen business, trade, political and cultural ties between Israel and NSW.”

The event was co-hosted by JBOD, the Executive Council of Australian Jewry and the Zionist Council of NSW.