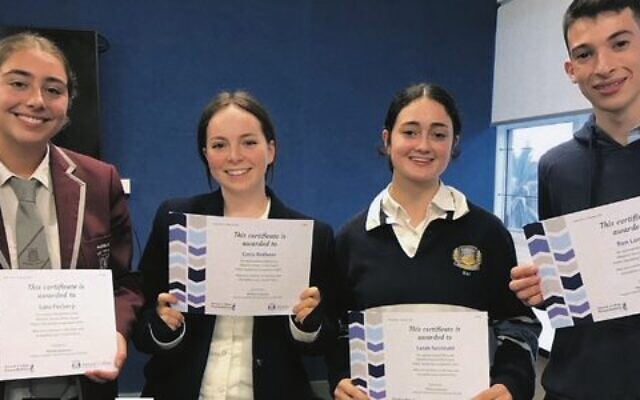 “Mikolot: voices of the future” is an international Jewish public speaking competition that aims to promote greater collaboration among Jewish students, cultivate public speaking skills and foster a more refined expression of Jewish voices in the modern world.

This year, with 50 speakers, 20 semi-finalists, eight Jewish schools and now six national grand finalists, it is a massive achievement to reach the final stages of this outstanding competition.

The grand finalists will be competing from Johannesburg, Sydney, Melbourne and Perth and will battle it out for a major contribution towards an approved Israel program (thanks to the generous support of the Moriah College Foundation and Arnold Bloch Leibler).

The judges this year include the Honourable Justice Rabbi Marcus Solomon, who is the first Orthodox rabbi to serve as a Supreme Court justice in Australia, TEDxSydney chair Cheryl Bart, Josh Burns MP and Paul Rubenstein, managing partner at Arnold Bloch Leibler.

Former prime minister Malcolm Turnbull was one of the judges last year and said it was “really inspiring” to see such a high standard of public speaking.

“It’s been a great pleasure to judge the Mikolot speaking competition,” he said.

“It’s wonderful to see so much collaboration and competition, in a very courteous way, between Jewish schools. I want to particularly commend Moriah College for taking part and helping young people express their ideas on the big issues and, at the same time, explore and articulate their Jewish identity.”

Head of Jewish life at Moriah College Talya Wiseman said: “The most powerful tool that we can give to you, the young people of today, is to know how to use your voice and how to share your voice with others.

Through that, you can make an impact and change the world. Mikolot allows you to delve into your own opinions.

“In a world where you we are constantly communicating, whether in person or via technology, the skills and experience that are learned in this competition will remain with you long after you finish year 12.”