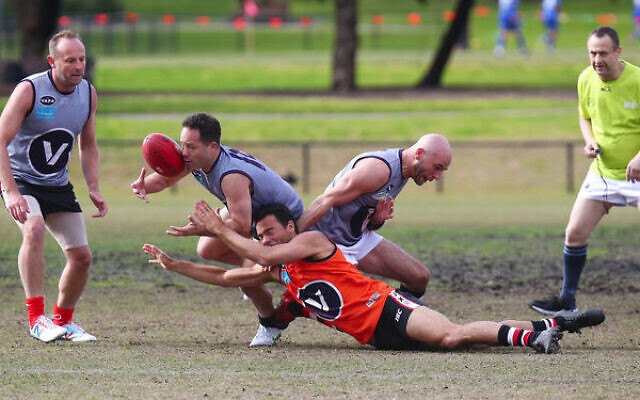 PRINCES Park was electric on Sunday as AJAX Junior Football Club celebrated its 50th anniversary in front of thousands of members of the community.

In addition to the 11 regular junior matches, the 3500-plus strong crowd was treated to a club legends match featuring many former players from the ’70s, ’80s and ’90s, with club life members Ant Lebransky and Mark Zuker coaching opposite each other. Many former players spanning decades made appearances, but it was Team Zuker 6.4 (40) who ultimately defeated Team Lebransky 5.4 (34). Lebransky was assisted by his father and club co-founder Graeme Lebranksy, while three-time junior premiership coach Jack Hoppe was on Team Zuker.

Umpires Ronnie Lewis (president of the AJAX senior club) and Mark Fine did their best to keep up with the scintillating pace of the legends game, while journalists Ash Browne and Daniel Cherny called the action from the sidelines. 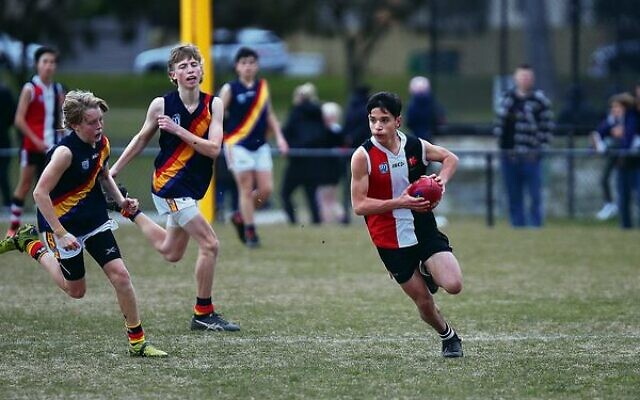 On a weekend celebrating 50 years of the AJAX Junior Football Club, the U14 Comets defeated St Bedes Mentone by one point at Princes Park, 6.4(40) to 6.3(39). Asher Franks powers away from the opposition. Photo: Peter Haskin

Off the field, it was a carnival-style affair featuring music, food stands, face painting, jumping castles and a visit from AFL Brownlow medallist Tom Mitchell.

“It was a fantastic day for the whole AJAX community,” said Davis.

“Among the 3500-odd attendees, we had three generations of people who have helped to build the club and are all part of its fabric. The day showed what a great community we have that are united through junior football.

“In the heart of Caulfield, we saw current players joined by juniors from the past 50 years. The success of AJAX JFC has been built on a strong culture of participation from not only those who play, but their families too. Events like Sunday help to build on this and make our club even stronger.

“The highlight was clearly the legends game, with current teams, many of whom are children of the past players, sitting along the boundary line supporting them.” 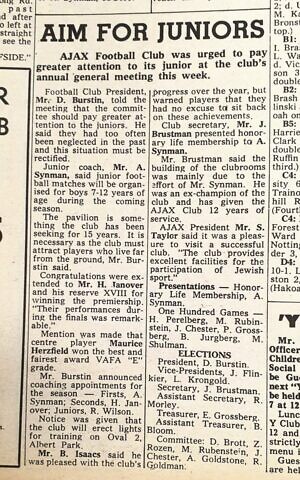 An AJN story from March 3, 1972, about the AJAX AGM discussing having junior teams.

It was midway through the winter of 1972 when the late Rabbi Ronald Lubofsky asked to put together a Sunday junior football team so his kids could participate in local footy because he didn’t went them playing on Shabbat. It was thanks to Abe Isaacs, the inaugural president and its first life member, Graeme Lebransky, as well as Don Finkelstein that the AJAX JFC became a reality.

They joined the local league (JSFA) mid-season of that same year and hired some Richmond jumpers from the local sports shop.

In 1973, the club fielded six teams from U10s to U14s, and had almost 200 players a year later, adopting a St Kilda-style jumper, adding a light blue star.

Now, 50 years later, for the 2022 season AJAX FC has more than 570 registered players filling its teams, including three girls’ teams.