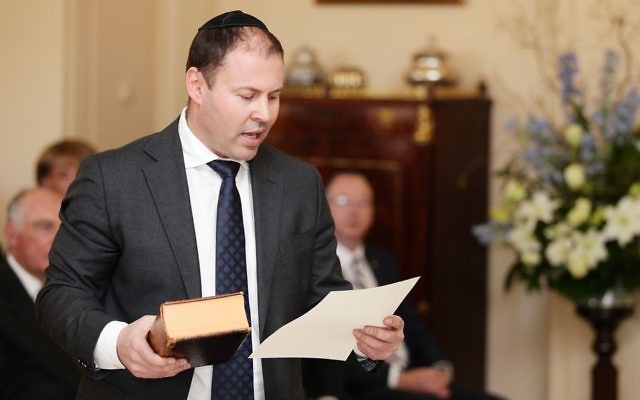 NEWLY appointed to Malcolm Turnbull’s cabinet, rising Liberal star Josh Frydenberg said he was “humbled” at his promotion in this week’s landmark reshuffle.

Frydenberg, who was formerly assistant treasurer to Joe Hockey, takes on the role of Minister for Resources, Energy and Northern Australia, a newly crafted portfolio that includes responsibility for development of the country’s Top End.

Sworn into office wearing a kippah and using a Bible given to him by his mentor and former governor-general, the late Sir Zelman Cowen, Frydenberg reflected to The AJN: “I appreciate the well wishes and support from the Jewish community at this special time.”

He described his new role as “an exciting economic portfolio which is inextricably linked to the opportunities created by the growth in Asia”.

Frydenberg, who was known in Liberal Party ranks as a supporter of ousted former prime minister Tony Abbott, stated: “It is a great privilege to be able to serve in Prime Minister Turnbull’s cabinet in this capacity … I look forward to working hard to ensure our nation has a productive and innovative resources and energy sector, and a northern Australia which fully capitalises on its enormous potential,” he said.

After the announcement, Frydenberg paid tribute to former treasurer Hockey and other ministers he has worked with.

“The entire Jewish community takes immense pride in your achievement. We very much look forward to continuing the excellent working relationship we have had with you in dealing with a wide range of policy areas of concern to our community … We extend our best wishes to you personally and to your government,” they stated.

“This is an achievement for which you and your family should be justifiably proud,” a letter co-signed by national chairman Mark Leibler, executive director Colin Rubenstein and director of international and community affairs Jeremy Jones read.

“You have been a great ambassador for the Jewish community which takes further pride in your current promotion. In your time in parliament you have demonstrated leadership, intelligence and integrity and this promotion is a fitting recognition of your talent, ability and hard work.”

He also completed a masters degree in international relations at Oxford and a masters of public administration at Harvard.

Working as an assistant adviser to then attorney-general Daryl Williams in 1999, he later became an adviser to Howard government foreign minister Alexander Downer, and afterwards became a policy adviser to prime minister John Howard.

After a failed tilt at preselection for Kooyong in 2006, Frydenberg was elected to Parliament in that seat at the 2010 election.

In his maiden speech in Parliament, he recounted the story of his grandparents’ and great-aunt’s migration to Australia from Nazi-occupied Europe, and praised the contribution immigrants had made to communities within his electorate.

Frydenberg was re-elected in 2013 and promoted to parliamentary secretary to the prime minister. Late last year, he was made assistant treasurer in a ministerial reshuffle.