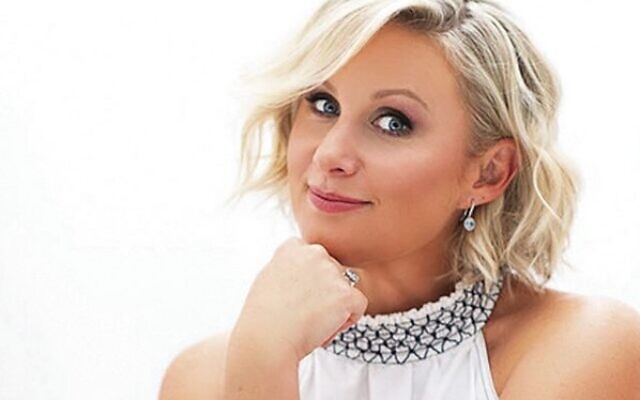 Emma Pask was drawn to jazz in high school. After only performing with her school band, Pask was surprisingly thrust on stage alongside legendary Australian jazz musician James Morrison at the age of 16. She never looked back. In fact, just one week later, she was approached by Morrison’s agent to book another gig. It was the beginning of a 20+ year career on the road with him.

She’s now one of Australia’s favourite jazz vocalists and Morrison is still singing her praises, saying, “Whilst it’s fashionable to be a jazz singer these days, she’s the real thing…”

But it was the crooning melodic jazz of Jewish composer Harold Arlen that drew her in from an early age.

“As a young performer, in the early days of your career, you learn quite quickly that a good repertoire is essential. In the jazz genre, you turn to the Great American Songbook to learn your ‘standards’. A collection of songs that all jazz musicians learn worldwide, a universal library of connection in a way,” Pask told The AJN.

“I found when looking at the repertoire I was drawn to, so many of the songs I loved were composed by Harold Arlen. And for many, many years I’ve been dreaming of putting together a show entirely dedicated to his work.”

Pask will present a one-night-only show, celebrating the music of Harold Arlen.

As well as composing the songs for the 1939 film The Wizard of Oz, including Over the Rainbow, Arlen’s major songs include I’ve Got the World on a String, Let’s Fall in Love, One for my Baby (and One More for the Road), Get Happy and lots more.

“What makes a great song for me, is a beautifully written story, with an alluring melody set to charming harmony,” Pask said when asked what audiences can expect from her show.

“Harold Arlen connected with some incredible lyricists who just seemed to gel with him and his ideas so beautifully. I also adore the humour and comic aspect Arlen evokes through some of his more lighthearted tunes.”

Of course, there’s also the story behind the man himself, which Pask says she’ll touch on throughout the show.

“So much of his music is known all around the world, but unlike many other well-known composers, not many people know too much about the man himself. In this show I’ll be exploring and sharing stories from throughout Arlen’s life, perhaps offering us an insight to his inspirations in music and what influenced him to write such an incredible body of work.”

Pask and her band, who she describes as “a collection of the most talented Australian musicians”, have worked on fresh arrangements of the songs and while she’ll present traditional versions, there will also be a sprinkling of more modern new ideas, which she’s incredibly excited about.

“My experience with this music, and jazz in particular, is that it brings a great freedom of expression, there’s so much room to move and explore and feel. Jazz teaches us human connection and communication. You get to have such incredible experiences as it’s vital to have your eyes and your ears and your hearts open to create this music with your fellow musicians.”

“Ac-Cent-Tchu-Ate The Positive” Emma Pask Celebrates the Music of Harold Arlen is at Sydney Opera House on April 24. Purchase tickets.