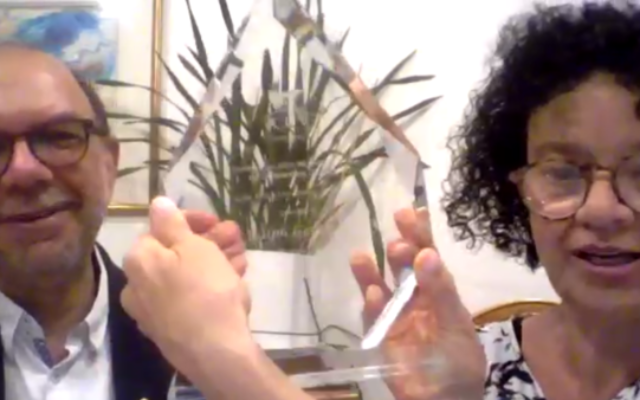 RABBI Ralph Genende’s widespread impact on the Jewish community was recognised with the General Sir John Monash Award from the Jewish Community Council of Victoria (JCCV) at its online AGM on Monday.

“His range of positions of responsibility, contribution and influence is extensive, both within the Jewish community and beyond,” stated JCCV executive member Frances Prince.

“He has influenced people to think about matters in a new light.”

She noted Rabbi Genende’s community engagement began in Zimbabwe and South Africa, then New Zealand, before moving to Melbourne where over the past 25 years he has been rabbi at Mount Scopus and Beit Aharon, senior rabbi at Caulfield Shule, and currently senior rabbi and general manager of Jewish Life at Jewish Care Victoria.

Receiving the award, Rabbi Genende said, “Not only is it in the name of a man I greatly admire and who inspires my work, especially in the ADF, but when considering the past recipients, it’s a privilege to be part of their company.”

Delivering his report, JCCV president Daniel Aghion said he would not elaborate on matters relating to late 2020 and early 2021. In that period, Andre Oboler served briefly as president, replaced by Frank Greenstein as interim president, before Aghion took on the role in March.

Aghion reflected on the roof body’s response to COVID, liaising with the state government on banning Nazi symbols, working on child protection, on the future of Jewish schools, on crisis management, multicultural relations, and continuing to disburse $3 million from the Victorian Jewish Bushfire Relief Appeal, as some of its major activities.

In her executive director’s report, Judy Fetter stated, “The challenges of the COVID pandemic have required articulate and measured responses, collaboration of organisations and direction. The JCCV has strongly delivered and accelerated the role and purpose of our roof body.”