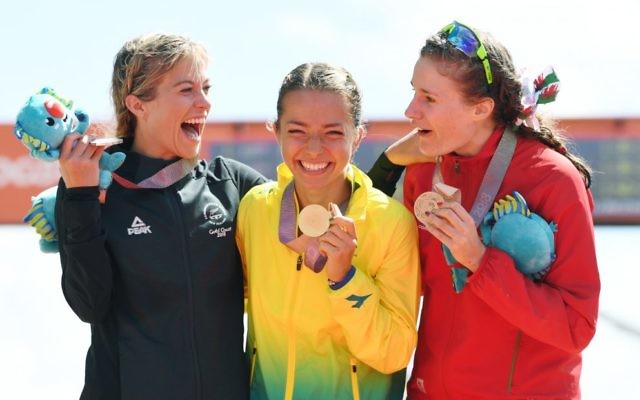 WE all hope and dream, but six months ago not even those in Jemima Montag’s inner circle could have believed that she’d be a Commonwealth Games gold medallist in just her third 20km race.

“It hasn’t sunk in yet, it still feels quite surreal. I believed in myself, but I wasn’t prepared for that,” Montag told The AJN.

Her race to remember got plenty people talking, some screaming and one commentator singing. “Well it’s a bit of a change of an old lyric but ‘my, my, my Jemima, walk this way’, you are the Commonwealth Games champion!”

Our humble star from Caulfield officially arrived on the international stage, and did so with pure style and grace, indicative of the way she walks.

“As an athlete being able to stand on the podium and see your flag raised and national anthem played is definitely the ultimate,” Montag said.

The event was certainly not without controversy, though. Race walking veteran and compatriot Claire Tallent – who trailed Montag for most of the race – took a 10-metre lead with just over two kilometres to go, before, in a sensational turn of events, she was shown her third and final red card, leading to her disqualification.

Tallent slumped to the ground, visibly distraught, but in a beautiful sporting gesture, she picked herself up and was the first to embrace Montag after she crossed the line.

“You don’t want it to happen to anyone, but to another Aussie is heartbreaking,” Montag said.

“I was just saying, ‘I’m so sorry, I’m so sorry’ but Claire said, ‘No, don’t say that. Enjoy this moment. This is your moment.”

Being a home Games, Montag had a large contingent of family and friends track side to support her.

“It didn’t even feel like I was racing. I was being pushed along by their support. I didn’t realise how much it’d help me in the last few laps, when negative thoughts come in and you are hurting. The noise was phenomenal, I fed off that energy.”

For the remainder of the Games, Montag will cheer on her athletics teammates, enjoy the vast array of activities on at the Games village, and maybe even sneak in a party or two before she returns to full-time uni student life.

And of course, she has her sights firmly set on the 2020 Tokyo Olympics.