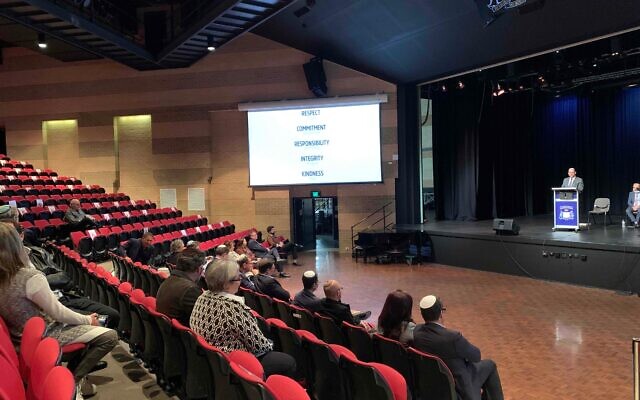 The Moriah AGM on Monday.

MORIAH College president Stephen Jankelowitz has reaffirmed his decision not to stand down over concerns about the board’s handling of a $7 million fraud scheme by a former school employee, as the college welcomes three new directors in its most contested board election in years.

They join existing board members Rina Michael and Oliver Freedman who were re-elected to the 11-person board.

In an unprecedented election, The AJN understands more than 600 Moriah association members voted by proxy, and more than 80 in person.

Noting that the college has now welcomed seven new directors in three years, Jankelowitz said, “This is healthy rejuvenation (70 per cent), with fresh skills and perspectives, while at the same time retaining continuity and ‘corporate memory’ to inform decision-making on the journey of regaining excellence.”

He continued, “To have both existing directors returned to the board in a contested election where an unprecedented 61 per cent of association members voted either by proxy or in person, is a wonderful affirmation that our stakeholders appreciate the conscientious and diligent manner in which the board has approached the challenges of the past year, and the practical solutions that we are offering.”

In his president’s address, Jankelowitz acknowledged recent community concerns and criticism about accountability, including calls for him to step down.

“In response to the terrible and devastating fraud we suffered over a 15-year period, some wanted me as college president to write a letter of resignation. There will always be a segment that holds that view,” he said.

“I felt and still feel very differently. I could not and would not run from the challenge. A challenge that we uncovered during my tenure as president but one that took place over 15 years. I chose to assume responsibility, to lead the fraud response and make sure there was no vacuum in leadership.”

He also encouraged parents and other stakeholders to get involved and work with the college board and leadership to encourage positive change.

Eric Borecki, Simon Wilkenfeld and treasurer Marc Weininger did not stand for re-election. The remaining directors continue their term until the school’s next AGM in 2022.